Nanobrewing is a hot topic around Stumptown these days.  For lack of an official definition I shall define it as brewing commercially on a very small brewing system (less than 3bbl, say).  Here are two examples of recent write ups on nanobrewing from Angelo at Brewpublic and Jeff at Beervana (and yes, I am going with the one word rather than nano brewing which should at least have a hyphen everyone!).  And it makes sense that it is: there are a large number of homebrewers and beer enthusiasts in the city (and the world for that matter) most of whom, at some point, have had dreams of starting their own business in brewing. 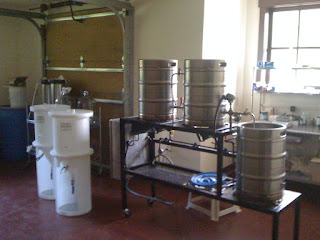 But commercial brewing is a capital intensive business and it is hard to get started without a pretty big wad of cash, even a relatively small 10bbl brewhouse can cost around $150,000 and that's before all the costs associated with installation.  So it makes sense that nanobrewing is appealing.

The economics of brewing are unchanged however and the per-unit costs of brewing on a nano system are very high.  To be a bit pedantic, the average cost per unit of a product is total cost (TC) divided by output (Q).  In brewing, total cost is made up of both variable and fixed costs.  The variable costs (VC) are costs that depend on output - the more beer you make the more labor, ingredients and energy you use.  Fixed costs (FC) are the costs that don't change as output changes - the cost of the brewing equipment and the building (unless you reach your present capacity and need to expand).

So TC = FC + VC.  ATC, which is basically your per ounce cost of beer.  Note that ATC=TC/Q which means that ATC= FC/Q + VC/Q.  In the second term on the left, both the numerator and the denominator are increasing in output so this can either rise or fall with Q (for argument's sake lets call it constant), but the first term ALWAYS falls with Q.  Voilá, this then is an increasing returns to scale industry.  Increasing output will ALWAYS  end up lowering your cost of beer.

Now the reality is that AVC can rise as well, especially when you get really really big.  It gets harder and harder to manage large enterprises, supply chains, etc.  My colleague Vic Tremblay has estimated though that the economies of scale are only exhausted at 2.5 million barrels a year, which is massive.  So the basic economics are undeniable - bigger is cheaper in brewing.

So where does that leave nanobrewing? Basically as a foot in the door.  If there is intense enough local demand for craft beer and enough beer nuts out there who will go off in search of nanobrews, some local bottle shops and pubs that will serve nanobrews, and a robust enough demand to be able to charge premium prices, then I suppose it can be a way to try and build up some funds to pay for future expansion.  If any place does, Portland certainly meets the above criterion.  I mean a city that can support Alan Sprints' passion for 17 years could certainly support a nanobrewery or three. But I agree with Jeff, nanobreweries are just a stepping stone - even those who think they will remain small, will soon find the tide of economic forces carrying them along.

But the good news is that very little has to be ventured so that even if it is lost, not much damage will be done.  And the local market for craft beer, already an embarrassment of riches, may get even more interesting.
Posted by Patrick Emerson at 11:24 AM

Email ThisBlogThis!Share to TwitterShare to FacebookShare to Pinterest
Labels: Nanobrewing