Faces Made for Podcasting

Here is a video from Jeff and my appearance on local Portland TV:

Here are the slides from my talk in Eugene for the University of Oregon's "Ideas on Tap" series.  Mostly just stuff cobbled together from the Brewer's Association and Josh Lehner at the Oregon Office of Economic Analysis.  Thanks to both parties.

Live in Eugene! The Future of Craft Beer 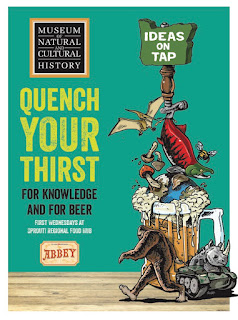 I will be talking and answering questions about the economics of craft beer and the future of the industry at the University of Oregon Museum of Natural and Cultural History's Ideas on Tap series this coming Wednesday (Dec 7) at 6pm at Sprout! Regional Food Hub in Springfield (I really hope Mayor Quimby is coming).  This is a science pub-type event where you come, eat and drink, listen to a short presentation and then join in a conversation about the future of craft beer.  Come and join the fun! 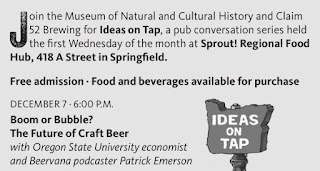 If nothing else, the beer will be good...
Posted by Patrick Emerson at 9:57 AM 8 comments:

Brewing in Europe: Old and New

Jeff and I had hoped to have a new pod ready for public consumption by today, but circumstances beyond our control have pushed that back another week.  It is entirely my fault, not Jeff's, as I have had a ridiculously busy fall and have had a number of unforeseen bumps along the road - the latest being my son's pneumonia.

So, to keep you engaged in the beery world I bring you two interesting articles about beery things from two august institutions.

Fist, the BBC has an interesting and very well-written article on the origins of brewing in the British Isles.


Second, the New York Times has a rather sad-yet-hopeful article on the Benedictine monks of Norcia Italy who had their monastery destroyed by an earthquake.  Beer might just be their path to salvation:


After the Oct. 30 quake, one of the few things left standing at the monastery was a small brewery, where for the past four years the monks have been making Nursia, a beer named for Norcia’s ancient Latin appellation.

Interestingly, the monks that populate the monastery are all American.

Check out this video:

Posted by Patrick Emerson at 9:15 AM 7 comments:

Jeff and Patrick solve the mystery of the lambic, the spontaneously fermented beer of Brussels. They talk to Frank Boon of Brouwerij Boon and Jean Van Roy of Cantillon about the process and art of lambic and describe the complex processes by which it is made.
Posted by Patrick Emerson at 1:08 PM 2 comments:

The new Beervana podcast is out. In it Jeff and I explore Goose Island's new stock ale, their attempt, with beer historian Ron Pattinson, to faithfully recreate the lost style. The podcast includes interviews with Pattinson and Mike Siegel, Goose Island Brewing Innovation Manager. Enjoy!