There has never been a beer company like AB InBev. It was created in 2008 when InBev, the Leuven (Belgium)-based owner of Beck’s and Stella Artois, swallowed Anheuser-Busch, the maker of Budweiser, in a $52 billion hostile takeover. Today, AB InBev is the dominant beer company in the U.S., with 48 percent of the market. It controls 69 percent in Brazil; it’s the second-largest brewer in Russia and the third-largest in China. The company owns more than 200 different beers around the world. It would like to buy more.

So starts this interesting piece on ABInBev and its Brazilian Chairman Carlos Brito from BloombergBusinessWeek.

There’s one hitch. AB InBev’s CEO is a skilled financial engineer, but he has had trouble selling beer. The company’s shipments in the U.S. have declined 8 percent to 98 million barrels from 2008 to 2011, according to Beer Marketer’s Insights. Last year, Coors Light surpassed Budweiser to become America’s No. 2 beer. (Bud Light remains No. 1.) Meanwhile, Brito is alienating lovers of AB InBev’s imports by not importing them. And he’s risking the devotion of American beer lovers by fiddling with the Budweiser recipe in the name of cost-cutting.

The article goes on to give a pretty interesting short history of how the Brazilian beer industry consolidated and how they essentially have conqured the global beer market - all from humble orgins, Brahma Beer (taste it and you'll know how humble).

But it is largely a hit-piece about how ABInBev has cut costs, cheapened ingredients and raised prices.  Which is meant to enrage the Bud drinkers of the world, but doesn't bother me one bit.  In treating beer like soda, ABInBev is just opening the door wider for craft beer.  It is no wonder craft beer sales are skyrocketing while macro beer sales are tanking.

It makes me wonder if the Brazilian experience is affecting Brito's decisions in the US.  In Brazil (where, unfortunately for the beer enthusiast in me) I travel in a few days, AmBev (Brahma, Antartica, etc.) and other macro brewers have effectively shut out competition through tied relationships with bars and restaurants.  There is a nascent craft beer scene, but it is tiny and struggle to get their product in front of customers.  Not so in the US where the free market in beer is alive and well.
Posted by Patrick Emerson at 9:19 AM 5 comments:

Only in Beervana: Welcome Hillsboro Hops!

It turns out I might like this team after all.  Pretty cool nod to the local craft beer industry and hops growers. 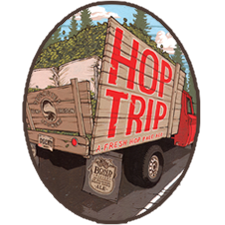 I have been negligent of fresh hops. So busy, in fact, that I let my own fresh hops wither on the vine.  So it was that I took an opportunity last Wednesday night to do a little impromptu fresh hop tour with the Beerax himself.

We stated at the mecca of fresh hops: Descutes Portland Pub.  Deschutes has arguably the most consistent success with fresh hops and they go all in, with no less than six fresh hop beers on tap that rotate continuously through the season.  Jeff's favorite Fresh Hop Mirror Pond was no longer available, much to my dismay, and his other big rave, Chasin' Freshies, was (a week later) a bit too long in the tooth which says a lot about how ephemeral fresh hop beers are.  They just don't last.  Chasin' Freshies had lost that aromatic fresh hop flavor and, to me who is very sesnitive, just tasted like fusel alchohol.  There was a fresh hop porter, which was actually quite nice, but not what punters are generally looking for in fresh hop season.  Hop Trip was very good but my favorite by a long shot was Flagline which at 4% ABV is a wonderfully tasty sessionable fresh hop ale (note the name had just changed to something else which escapes me: something road perhaps...whatever, look for the 4%).  Tremendous.

We then meandered to Gigantic where "The Most Interesting Beer in the World" was loosing it freshness as well. Still good, but no longer great.  The risks of waiting too long to go and get fresh hop beers.  We ended up at the Laurelwood Westmoreland pub where the Fresh Hop Red was no longer available.   Trying to decide on a replacement was a challenge with a server who knew nothing about beer and seemed very bemused that we would want to know what hops were used in the beer we chose.  She didn't have any idea and went to find out - with no luck.  Apparently the pub knows nothing about the beer they serve.  Methinks a staff training session is in order.

So the moral of my story is not to wait too long to go and seek out fresh hop beers.  There are still some good ones out there but they are quickly fading.  And if you do find one, ask for a taster first to see how well it is holding up.
Posted by Patrick Emerson at 9:32 AM 1 comment: