Here is the list of Oregon's winners at the 2013 Great American Beer Festival in Denver. 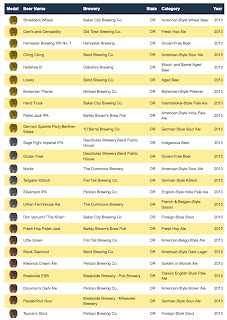 Apparently I must get myself some Barley Brown's IPA!  Also, it is nice see Flat Tail's Kölsch, of which I have waxed rhapsodic, win a well-deserved silver.  Ditto Pelican's Silverspot IPA.

And I have been ordered quite ardently by Jeff to try The Commons Brewerys Urban Farmhouse Ale.  Will do.

Nice showing and kudos to all the winners (and the myriad other fantastic brewers in the state)!
Posted by Patrick Emerson at 3:27 PM No comments:

It is not often I pass on press releases in this blog but the Oregon Coast is a true treasure (especially in fall in my humble opinion) and now it is becoming a craft beer mecca as well.  So it is with pleasure that I pass on to you this info:

WHAT:  As its number of breweries continues to grow, Oregon’s North Coast is gearing up to become one of the Northwest’s next great beer destinations. The communities of Astoria-Warrenton, Seaside and Cannon Beach invite beer enthusiasts to join the fun this fall with two weekends of sudsy events. Taste the Beer 101 brew crafted for the occasion by Astoria Brewing Company, Fort George Brewery, Seaside Brewing Company and Bill’s Tavern & Brewhouse. Meet the brewers and beer icons, learn about Oregon’s brewing history, enjoy beer dinners and get great deals on lodging.

Event locations and details are posted on http://visittheoregoncoast.com/north.

TOP EVENTS:  The Alchemy of Glassware and Tasting with Lisa Morrison, The Beer Goddess
Saturday, Oct. 19, 3:00 p.m. at Fort George in Astoria. Forget size. Shape matters. And not all beer glasses are created equal − nor are they "one shape fits all." Find out from Lisa "Beer Goddess" Morrison why glassware is an important component and how aroma plays a key role in how your beer tastes. Morrison, owner of Belmont Station Beer Store & Cafe, hosts Beer O'Clock Radio across Oregon on the Radio Northwest Network and is the author of Craft Beers of the Pacific Northwest. Cost: Free. Limited to 30 participants. Sign up at the counter in the pub.
Behind-the-Scenes and Tasting at U Street Pub & Eatery
Saturday and Sunday, Oct. 19-20 and 26-27, 2-3 p.m. and 3-4 p.m. at U Street Pub & Eatery in Seaside. Join owner Teri Carpenter for an educational talk about U Street’s intricate “MacGyver style” operational system, and an exploration of proper pouring techniques and equipment. Did you know that a stout is poured differently than an IPA or Lager? This session is perfect for home brewers and curious entertainers. Cost: Free.

Oregon Beer Through the Ages with John Foyston, The Oregonian
Friday, Oct. 25, 6:30 p.m. at Astoria’s Wet Dog Café.
Educational talk and tasting about the history of brewing in Oregon with The Oregonian’s “The Beer Here” columnist John Foyston, who will share insights gained from covering the local beer industry since its early years. Cost: Free. Limited to 24 participants. Food and beer can be ordered from the menu during the session.

Register to attend these events and more at http://visittheoregoncoast.com/north.

BEER TOURS:  Transportation is offered for one of two 4.5-hour tasting tour routes Oct.19, 20, 26 and 27. Tickets cost $49 and must be purchased in advance; limited to 25 participants. Get details at http://visittheoregoncoast.com/north.

CONTACT: For more information about the region, the event and local lodging options, call the Seaside Visitors Bureau at (888) 306-2326, email: info@seasideor.com or visit http://visittheoregoncoast.com/north
Posted by Patrick Emerson at 2:58 PM No comments:

What the Current Washington Stand-Off Means to Beer

The DC shut-down over the congressional Republicans refusal to sign a continuing resolution that does not include new cuts to Obamacare actually impacts the craft beer industry in two meaningful ways.

The first and most obvious is that with the shut-down the Alcohol and Tobacco Tax and Trade Bureau (TTB), a little-known arm of the Treasury Department, is also mostly shut-down as well.  That means no approval for new recipes and new labels.  Of course, TTB will continue to collect taxes from existing permit holders.

From the Associated Press:


Lagunitas Chief Operating Officer Todd Stevenson called the TTB shutdown a "headache." He said the company was planning to submit an application to package its autumn seasonal Hairy Eyeball in 22-ounce bottles instead of 12-ounce bottles but can't move forward.

"It's just aggravating," Stevenson said. "It is frustrating that government can't do its job. Doing what they're doing now is unprecedented."

Bryan Simpson, a spokesman for New Belgium Brewing in Fort Collins, Colo., said his brewery has three recipes and five new labels awaiting approval. The company is especially worried that the release of its new spring label, Spring Blonde, could get pushed back. More delays might force New Belgium to shell out extra money to speed up the label printing and rush the beer to market, he said.

"Everybody is frustrated in general," Simpson said. "The whole way this has played out has been disappointing for the entire country."

The second is that Obamacare might, in fact be a boon to craft beer businesses that are typically of a size that will be helped immensely by it. Here is James Surowiecki of the New Yorker:


[T]he likely benefits of Obamacare for small businesses are enormous. To begin with, it’ll make it easier for people to start their own companies—which has always been a risky proposition in the U.S., because you couldn’t be sure of finding affordable health insurance.

Even more important, Obamacare will help small businesses with health-care costs, which have long been a source of anxiety. The fact that most Americans get their insurance through work is a historical accident: during the Second World War, wages were frozen, so companies began offering health insurance instead. After the war, attempts to create universal heath care were stymied by conservatives and doctors, and Congress gave corporations tax incentives to keep providing insurance. The system has worked well enough for big employers, since large workforces make possible the pooling of risk that any healthy insurance market requires. But small businesses often face so-called “experience rating”: a business with a lot of women or older workers faces high premiums, and even a single employee who runs up medical costs can be a disaster. A business that Arensmeyer represents recently saw premiums skyrocket because one employee has a child with diabetes. Insurance costs small companies as much as eighteen per cent more than it does large companies; worse, it’s also a crapshoot. Arensmeyer said, “Companies live in fear that if one or two employees get sick their whole cost structure will radically change.” No wonder that fewer than half the companies with under fifty employees insure their employees, and that half of uninsured workers work for small businesses or are self-employed. In fact, a full quarter of small-business owners are uninsured, too.


So Obamacare should make it easier for small craft breweries to hire and retain employees and could lead to more folks taking risks and starting their own business because they don't have to fear leaving that job with benefits.


Posted by Patrick Emerson at 3:44 PM No comments:

On the Evolution of Fresh Hop Beer 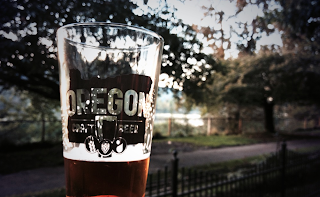 There was a moment, after having spent a couple of hours with Mr. Beervana himself at the Oregon Brewers Guild's Fresh Hop Festival at Oaks Park on a beautiful Oregon fall evening, when I turned to Jeff and said something along the lines of 'fresh hop beers have come a long way.  Do you remember a few years ago where there were many more duds than good beers at this fest and tonight it is precisely the opposite.'  He did.

Indeed, Oregon brewers are really beginning to master the fresh hop beer.  Most of the beers I tried were good to exceptional.  Those that weren't were generally not due to the misuse of wet hops.  I am firmly in the camp that there is no 'correct' way to brew with wet hops, a fresh hop beer is brewed with wet hops and is characterized by that earthy, raw fresh hop essence.

Not only were the beers good, but the fresh hop essences were refined - much less grassy than in the early days and more of the fecund essence of the hop flower.

These days many brewers take a lot of the guess work out of it by reserving the wet hops for dry hopping (wet dry hopping?  dry wet hopping?).  This is fine with me as long as the above mentioned fresh hop essence is present in the finished product.

Anyway, the point is there are a lot of truly exceptional fresh hop beers out there this year and here is a list of my faves from the fest (keep in mind I tried only 10 - I am sure there are many more):

Crux: Off the Fence

Maybe the Queen of the ball.  I found many Belgian fresh hop experiments lacking in the fresh hop essence.  The Logsdon Seizoen, for example, is a fantastic beer but you couldn't detect a hint of fresh hop. Ditto The Commons. This 'Belgian Pale' mixed hints of Belgian yeast, pale ale body and fresh hop essences beautifully in a truly new and winning way.

The reigning masters of the fresh hop do it again: just about the perfect fresh hop American Pale.  The Blueprint.

I prefer the Killer Green, the Red not being my preferred malt base, but both are exceptional.

Go big or go home: this is Gigantic in all the name connotes.  Completely hop infused like their IPA but with another layer of fresh hop on top.  Yummy.

Like Gigantic this is a hop infused IPA and even the fresh hops are saturated and envelope the tongue.  Very, very good.

And, of course, you have to give a nod to perhaps the coolest of all the fresh hop beers: Lucky Lab's The Mutt.  Full of hops from backyards all over Portland, The Mutt is quintessentially Portland and tastes just like you would expect: a muddy, mashed up hop note, but a surprisingly good beer, especially when you know from whence it came.
Posted by Patrick Emerson at 9:52 PM No comments:

I had completely forgotten that the good folks at Oregon Beer Growler Magazine asked for permission to reprint a blog post I had from a while back until a colleague mentioned it to me.  He was visiting the Corvallis Brewing Supply store and picked up a copy of the mag and saw my mug.  I am on page 4 of the September issue: 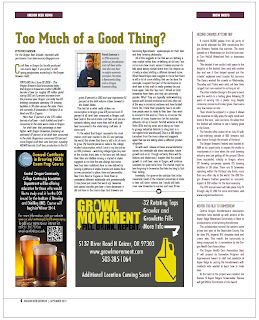 By the way the photo of me was taken at Thornbridge's Packhorse Inn in Little Longstone in the spectacular Peak District by Beervana's Jeff Alworth during our British Beer Odyssey.