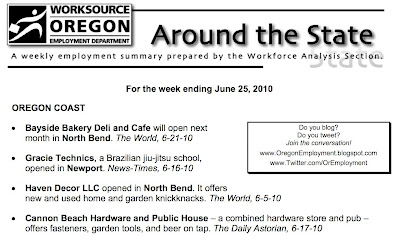 Chuck Sheketoff sends along this press release (note the fourth entry) from the good folks at the Oregon Employment Department and muses: "wonder if a personal injury lawyer will set up an office nearby to represent the people who got injured using tools under the influence..."  Too funny.
Posted by Patrick Emerson at 4:51 PM 4 comments: 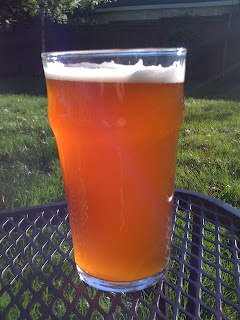 Despite my claims that it is the Best Beer in the History of the World™, this the first iteration of The Hopopotamus™is good but could use some fine tuning.  The hop alchemy yielded stong citrus but fewer floral notes than I had hoped.  The yeast (Wyeast American Ale II was a wonder, hungry and effective - the final gravity of 1.010) was a good choice and I am pleased with the color and bitterness. But the hops don't sing in perfect harmony.  I slightly under-primed the bottles intentionally to give it a bit of a cask mouthfeel.  And it is definitely a beer that does not like to be served too cold.

UPDATE: Serving it at appropriate temperature transforms the beer. It is really quite tasty when not chilled beyond recognition. My fridge seems to have gone a bit hyperactive, once I solved the temp problem the beer really shined. I am very pleased.

I have an idea of making the The Hopopotamus™ as an annual experiment in hop alchemy.  Each year the same recipe save for a new mix of many hop varieties.

Anyway, The Hopopotamus™ made me think of another way in which I fail to act like a textbook rational economic agent: I have a hoarding problem and therefore "time-inconsistent preferences.

Do you ever get caught up in the moment - at a pub say - and have that extra beer that later you regret ("I really didn't need that last one and now I have a headache...")? These types of indulgences that lead to later regret - something you would do differently if you had the chance to do it again - are examples of what economists like to call "time-inconsistent preferences."

It applies to procrastination as well, putting of an unpleasant task (like mowing the lawn, say) and then having to do it later under worse conditions (longer grass) is another type of time-inconsistent preference.
What the term refers to technically is when people make mistakes in their choices because they put too much weight on the present. If people acted like computers they would very rationally take into account all future time periods appropriately and we would never regret our actions (or at least those with predictable outcomes).
For me this behavior manifests itself in many ways but one of the most apparent is my tendency to covet.  I hate to consume something that I enjoy because once I do, I know it will be gone. This could be rational if I get enjoyment in the anticipation and in the consumption - by delaying consumption I could maximize the total enjoyment I get for the good. But for me it becomes a burden, delaying until finally to good itself degrades, or the optimal moment passes. In fact this why, after a period where I was building up a collection, I stopped cellaring wine. I could never deal with the whole waiting until the optimal time problem.
Well, this same type of time-inconsistent behavior bedevils me in beer brewing as well. Last weekend The Hopopotamus™ was finally ready for its debut, and the result is great.  But now I have the problem of coveting it - I want to drink it and it is fresh and ready now, it will only get worse through time, but I don't want to reach the day when it is all gone. So I find excuses not to drink it and eventually will have a number of bottles in the back of the fridge that are way past their sell-by date so to speak. I will then regret coveting it so much and wish I had been less stingy with it early.
At least I have an understanding and a name for my disorder.
Posted by Patrick Emerson at 12:23 AM 2 comments:

Here is an NBC Nightly News segment that came to my attention from the Oregon Brewcrew listserv on the growth and popularity of craft breweries in England. Sound familiar? It is, but with a twist - this report suggests that the craft breweries in England are concentrating on cask ale. I don't know if this is generally true, but if so it is an interesting contrast to the US where cask is very slow in catching on. Perhaps the difference is that the UK never lost reasonably good beer but did lose local beer whereas in the US we lost local and good beer. Now we are happy to have good beer back, but it seems only a matter of time before the local, fresh, sustainable food movement embraces cask ale.

Visit msnbc.com for breaking news, world news, and news about the economy
Posted by Patrick Emerson at 9:17 AM 1 comment: