The World of Macro Brew

This from NPR's Planet Money.

Posted by Patrick Emerson at 6:03 AM No comments: 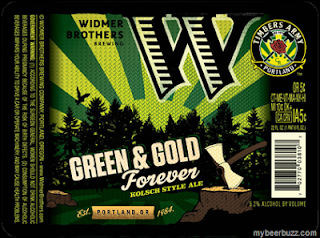 Hat trick: my team, one of my favorite styles and a recipe by a cool dude - Abram Goldman-Armstrong (even if I am not a fan of Cascadian Dark Ales).


From the department of trying a little too hard to be convincing, I bring you this news from Britain - home of the svelte beer drinker:

"Nutritionist Dr Kathryn O’Sullivan, who carried out [a] review of the scientific [evidence], believes that swapping beverages for beer may actually be a sensible way to diet"

Um...okay. I always suspected that drinking lots of beer would make me slim and health, thank goodness I was right all along.


Although the industry-sponsored research may seem incredible to some it in fact adds to an emerging body of thought that the beer belly is a myth.

Beer has fewer calories per 100ml than wine, spirits, and even orange juice, it is claimed.

“Unfortunately beer has this image as a high-calorie, high-fat drink,” Dr O’Sullivan told The Times. “It is very unfair.”

If you consume huge amounts of beer you will gain weight, but the same is true for those who glug wine by the gallon.

The report “Beer & calories; a scientific review” points out that the drink contains vitamins, fibre, and antioxidants and minerals such as silicon which may help to lower your risk of osteoporosis.

Although Dr O’Sullivan does not dispute the evidence of the effect of excessive alcohol consumption on increased mortality and morbidity, she argues there is a growing scientific support that moderate consumption of beer can be associated with health benefits.

It is good to know my protruding belly is a result of all of that broccoli my wife makes me eat!

Actually, there is one bit that is interesting - wine has more calories than beer!  Oops, that is per 100ml not per serving...dang.  Okay so I'll I have to do is dink beer from a wine glass....

So let's cut to the chase: swapping types of drink to save on calories only makes sense if you stick to the same quantities which is really an absurd and tortured result. But you have to admit, having two shot glasses worth of beer when you go out drinking is probably a decent way to keep off the pounds.
Posted by Patrick Emerson at 3:52 AM 4 comments:

A Taste of Home: Rogue in Brazil

There are many great breweries in Oregon but without a doubt the most widely traveled is Rogue.  Here is what I found today in my local São Paulo Pão de Açúcar: 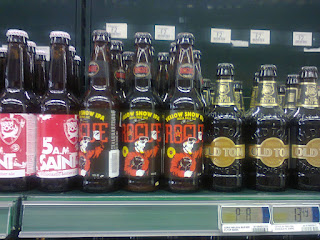 Which is remarkable for two reasons: one, little old Rogue from Newport, Oregon makes it all the way to Brazil; two, it is Yellow Snow IPA!  What, no Dead Guy?  Unfortunately I am not high on Yellow Snow, I much prefer Brutal IPA, but I did not come all this way to pay $8 for a 12oz bottle of beer I can get any day at home anyway.

Amusing that the two other widely traveled beers I have seen all aver the world are also represented at Pão de Açúcar: the social media marvel Brew Dog from Scotland (seen in the pic) and Brooklyn (not pictured).

Anyway, the kids were excited to see Rogue in the store - how typically Oregon: little kids know Oregon beer.

I should also note that I saw Rogue's Voodoo Doughnut beer in San Diego which then reminds me that we met a kid from Washington DC her in SP whose knowledge of Portland consisted on only one thing: Voodoo Doughnut.

Funny that.
Posted by Patrick Emerson at 7:57 AM 2 comments: 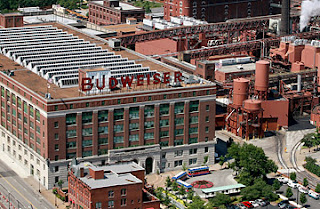 Finally I can actually blog about economics and beer and, what is more, I get the chance to be pedantic!  Oh joy.

So the US Justice department is finally becoming concerned about the consolidation of big beer and is suing to block the merger of ABInBev and Grupo Modelo:

The Justice Department is worries that the resulting market concentration from the merger would give the combined company too much pricing power and would lead to higher prices and lower consumer welfare.

And brewing is an industry naturally inclined to big firms (it was not accident that AB became a giant) because the economies of scale are so large.  This makes consolidation and concentration natural.  Economic theory has long realized that with market power firms can raise prices and lower output.  Contrary to popular belief it is the lower output that creates the diminished social welfare NOT the higher prices.  (Prices just determine the split of the surplus, but from a social point of view whether it is the consumers or shareholders of the company that benefit more makes no difference what we care about is creating as much surplus as possible).

But how does the Justice Department (and other government entities like the FTC and the FCC) decide when big is too big?

The starting point is often a measure or measures of market concentration like the four firm concentration ratio, which simply adds up the percentage share of the market for the top four firms, or the Herfindahl index which adds the squares of every firms market share (these are decimals, 0.15 for 15% of the market so this amplifies dominant firms impact on the market).  When these numbers get big, the DOJ starts to worry about the effect on prices. Sounds easy right?

But is is actually quite difficult because before you can measure the concentration you have to define the market.  In this case the merger might create a dominant firm in the macro lager market but are they competing with craft brewers as well?  What about spirits?  By all accounts the macro brewers are losing market share much faster to spirits than to craft beer, so shouldn't you include them when you are measuring the amount of competition?  ABInBev will certainly argue that they should.

But how do you tell?  In the end it is a judgement call but one useful measure is how sensitive are sales of macro lagers to changes in the prices of other possible competing goods. [Cross price elasticity for you econ nerds]  For example if a decrease int the price of vodka creates a sizable drop in Bud sales you could make a convincing argument that vodka is a real competitor to Bud and that vodka distillers should be counted as in the same market as ABInBev.

Finally, if bigger means more efficient and lower cost than it is not clear that preventing the merger actually makes social welfare increase.  This is why we typically allow monopolies in industries with huge economies of scale (power generation and transmission, for example) but then regulate them in response. We call such firms natural monopolies.

I have no dog in this fight and I don't think macro brewing rises to the standard of natural monopolies, but this an administration that has not been typically intolerant of monopolies so I suspect that there is good reason to worry about this.  But I don't drink macro beer so I don't care all that much.

I do think that macro brewers perceive themselves in a battle with spirits and barely give craft beer a thought.  So I don't think the outcome of this case has much of a bearing on the health of the craft beer industry.
Posted by Patrick Emerson at 5:03 PM No comments: