From our friends at Beervana (the Blog) comes this explanation (via The Onion) of Beeronomics: 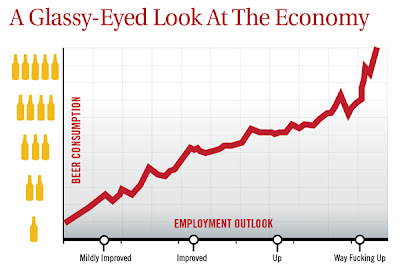 The New York Times comments on the declared intention of Anheuser-Busch InBev and MillerCoors to raise prices on their beers at a time when the economy is in the tank, sales are down and more and more consumers are going for craft beer. They go on to wonder if this is going to set off any anti-trust alarms in the Obama administration. Jeff over at Beervana wonders what the companies are thinking raising prices in the face of declining market share? But economists know that it's all about price elasticity of demand. You may make more money if you give up some sales but charge more. [As an aside, the same principle is true of parking lots. People often wonder why downtown parking lots charge so high a price that they don't fill up - how can it be a profit maximizing strategy to leave unfilled spaces? - the reason comes from the fact that they charge a single price and are responding to elasticities]

Anyway, the fact that the two companies have an 80% market share is part of the economic calculations that go into anti-trust investigations, but it is not the only thing.

One of the most important concepts in anti-trust is the contestability of markets: how easy is it for a competitor to come along and compete against you? And in this the beer market is pretty contestable as shown by the rapid rise of craft breweries. In fact, the very success of craft brewing over the last decade would be exhibit number one in an anti-trust hearing - this success shows that beer is an easy market to get into and thus there is intense competition. Now most of this competition is local and the big breweries have vast economies of scale on the national level, but their ability to rise prices is severely limited by fierce competition in local markets from craft brewing.
Or course this can be seen another way, because another concept in anti-trust that factors in is how we define the market. Are macro-brews and micro-brews really in the same market and thus micros are in fact real competition for macros? (And for that matter are all alcoholic beverages actually part of a single market so that the real share of these companies is quite small?) I have wondered in this blog many times about how high is the cross-price elasticity of micro and macro beer for this very reason, for it is with this figure that we decide how close the markets are. In other words when the price of Deschutes beer rises, how big a bump in the demand for Bud is there?
I have to admit that my sense is that the AB InBev and MillerCoors could make a pretty spirited defense of their case in an anti-trust hearing. They could show how in local markets beer sales are very competitive and that the national economies of scale they enjoy are not easily leveraged in local markets to keep prices artificially high. To me, the decision to raise prices just seems like simple profit maximization - and good news for local craft brewers as it appears there will be more market share to be had.
Posted by Patrick Emerson at 4:08 PM No comments:

On a short little getaway to Seattle, so a quick post today on a couple of little news tidbits.

First, The Oregonian reports that the OLCC is considering doing away with its prohibition on happy hours advertisements. Ads are an interesting thing in economics. Some types, like ones that say "this dish soap really cleans well" seem to be purely a waste of money - they all say it and the consumer is no better informed for having seen the ad. So why do they do it? (Scour this blog to find the answer). Another type of ad we call informational and their utility to consumers is obvious: they inform consumers about particular product features, prices, hours of operation, etc. This reduces search costs which is good for competition and usually results in more sales and lower prices - both good for consumer welfare. So in this case, were alcohol like any other good, this would be unequivocally good for consumers. To the extent that happy hours ads promote excessive drinking and this excess has a social cost, one could argue that the net effect is ambiguous. For my part, I think it is good. Happy hours are no mystery (bars and restaurants can advertise in the establishment all they want) so allowing outside advertisements I don't think is going to increase consumption much, but it will allow consumers to make more informed choices when it comes to happy hour, and this is a good thing.
Second, via the Beervana blog, comes news that craft beer sales continue to rise despite the recession, albeit as a slightly lower pace than a year ago. As I have mentioned a number of times before, it was not at all clear if macro-brews were seen by consumers as a close substitute to craft beer, so that when times got tight, coupled with rising prices, consumers would flee craft beer en masse. The answer appears to be nope. That is very good news indeed.
Enjoy the weekend.
Posted by Patrick Emerson at 4:07 PM No comments:

The Portland Business Journal is reporting that the Craft Brewers Alliance, created in the merger of Widmer and Red Hook, which had had to weather some merger related bumps in the road, has had a very strong quarter and has returned to strong profitability.

This is a much more complicated business structure than most, but to the extent that it shows craft beer sales are remaining strong in the recession, it is welcome news.
Good on ya Bros.
Posted by Patrick Emerson at 4:06 PM No comments:

Email ThisBlogThis!Share to TwitterShare to FacebookShare to Pinterest
Labels: Widmer 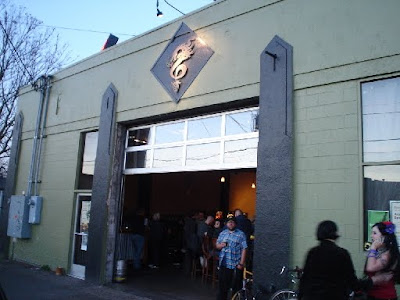 Beervana, the Blog has a nice follow up on the state of the Green Dragon, an independent tap house in SE Portland that was treasured by the beergnoscenti, but which ran into financial trouble and was bought out by Rogue. You might expect Rogue to transform the Green Dragon into a Rogue house featuring all or mostly Rogue beer. You would be wrong. They have kept it largely as it was and sometimes it can be hard to find Rogue beer there at all.

In fact as, Jeff points out, Rogue is going one step farther and hosting an 'Indie Beer Fest,' and wonders why they would highlight their competition? Well it is likely because they are cool and don't see their business as a zero-sum game. And they might be right.
There are many instances in economics where business relationships are both competitive and cooperative. One example is where there are network externalities: the more people use a product the more other potential buyers value it. Consider the very first phones, if you were the first person to own a phone in the US, it wasn't worth much, but once your entire community got one, everyone got more value from it. So if you were a single phone manufacturer, sure you wanted to get as many sales as possible for yourself, but the price you could charge and the number of potential customers increased with the number of sales your competition made as well.
Another example is where you have a demand that evolves, like from weak diner coffee to strong Starbucks coffee. Customers learned to prefer strong coffee and began to demand it everywhere. So if you were a coffee house selling strong stuff, having Starbucks expand locally was both direct competition, but it also served to increase the demand for your coffee.
Both of these type of situations are probably relevant for the pub business. A pub business specializing in craft beer in Portland will be enhanced the more good beer there is to serve and the more people have learned to prefer craft beer. Even if you brew your own beer, exposing more people to good craft beer might lead to a net increase in demand for yours as well.
I doubt that Rouge thinks in these terms, but that is the thing about economics - understanding why patterns exist even if the participants don't understand the incentives involved. Jack Joyce once described the craft beer industry as jerk-free (OK, he used slightly more colorful language). I think that this is partly that there is a recognition that while there are many competitive aspects of the business, each individual success bleeds over to group success. With the focus on taking away market share from macro-brewers and creating more demand, there is just less focus on internecine battles.
OK, head too full of economics, getting too serious about all of this. Time to relax and have an Oregon beer. Cheers, and have a good weekend.
Posted by Patrick Emerson at 4:05 PM No comments: