Posted by Patrick Emerson at 8:12 AM No comments:

Email ThisBlogThis!Share to TwitterShare to FacebookShare to Pinterest
Labels: Pubonomics

On the Rising Price of Beer


Loren Berlin in the Daily Finance writes about the economic forces that determine beer prices. It starts with the usual suspects: the inputs. But first, are beer prices rising? Yes, says she:

...I began to wonder why my brew was getting more expensive. Turns out, a lot goes into the answer.

Three years ago, Bavaria, the largest state in Germany, suffered a bad hops harvest. These green, pine cone-shaped flowers are the essential ingredient in brewing beer, and because Germany alone provides roughly 35% of the world's supply of hops, the crop shortage created an immediate and significant problem for beermakers who found themselves suddenly scrabbling to locate this key ingredient. And as we all know, when supply decreases and demand doesn't, prices rise. To cover those new higher costs, brewing companies added a few cents to the price of our beer.

Of course it was not just the hops crop in Bavaria, but a fire in Yakima and bad weather in other hops producing regions down under.

the other key commodity that goes into our beer are grains -- most often malted barley, but sometimes wheat or even rice.

...a heat wave in the Ukraine can directly add to the cost of beer -- and is doing so right now. Global grain production is down, thanks in large part to unusually brutal heat in the former Soviet Union and droughts in China. See the previous discussion of supply and demand, but in this case, the effects are wider, because unlike hops, which is mostly used in beer, we've got a few other uses for grains.

Next she pinpoints other cost factors like the price of oil:

Then there's transportation. All those raw materials have to be shipped to the brewers, and the finished products shipped to the retailers who sell it to us, all of which requires fuel. Fuel, that, until very recently, had been getting steadily more expensive this year. Yet another addition to the price we pay for our beer.

Of course brewing beer uses lots of energy as well...

But here is the really interesting stuff:

Beyond simple responses to these market forces, price increases may also be a conscious move on the part of the large beer manufacturers. According to Benj Steinman at Beer Marketers Insights, Anheuser-Busch InBev (BUD), for example, made a "strategic shift," to shrink the price gap between the company's more and less expensive brands to avoid "trade down," a term used to describe the consumer's tendency to purchase the less expensive of two beers manufactured by the same company. Given that Anheuser-Busch InBev controlled 48.3% of the U.S. beer market in 2010, any strategy they follow is sure to have wide effects. It's likely other manufacturers will follow suit, further raising the cost of our beer.

This is fascinating and can be applied to a familiar 'spatial' model of product variety. It says that firms provide consumers with lots of variety because consumers are quite different in their tastes and if you give them something in their sweet-spot, you can charge them a premium for it. Of course consumers are value conscious as well, so if the thing that doesn't match their preferences perfectly is much less, they may just switch - which defeats the purpose of providing the variety in the first place.
Posted by Patrick Emerson at 9:00 AM 1 comment:

Given the proliferation of new craft breweries and brewpubs - new ones seem to be opening up every other week - it is tempting to think of this time as the very pinnacle of craft brewing in the US in the last 100 years. Not so fast, it turns out that the reality is a little more nuanced.  In fact you can see from the graph above that the expansion in breweries was going gangbusters until they peaked in 1998 and then the bottom fell out.  Since then it has been a decidedly rockier road.

Here are some other Oregon centric factoids:

Thus there are boom and bust cycles in craft brewing and one should not take this current boom as a signal that the only way is up.

Economists call the entry and exit of firms the process of 'creative destruction' which has to do with the fact that innovation continues and new more creative firms may start up and old, less creative ones shut down.  So I wonder whether y'all think that it was the better breweries that survived or just the better businesses?

The take-away from all this is, I suppose, be very thankful you live in a time of craft beer ascendancy, but don't take it for granted. Support you local brewer!
Posted by Patrick Emerson at 2:53 PM 3 comments:

Another Step in the Craft Brew Revolution: In-House Malting

I can see the future: craft breweries touting their small-batch house-malt beers.  It may soon be possible thanks to some industrious Beaver of Oregon State University.

John Foyston, writing for the Oregonian has the story of the OSU malter:

A group of Oregon State University engineering students didn't wait to graduate before endowing their alma mater: For their senior project, they designed and built an innovative barley malter that allows OSU to now teach every step of brewing, from barley field and hop yard to bottling line.

"It's the bread machine of barley malters," said professor Pat Hayes of OSU's Crop and Soil Science department. The malter, which looks a bit like a half-ton stainless steel rocket motor, automates and consolidates the task of steeping, germinating and kilning barley to make barley malt.

Graduate student and team leader Joe Hortnagl and mechanical engineering seniors Aaron Mason, Tyler Froemming, Eric Sunderland and Curtis Barnard designed and built a machine into which you can pour raw barley, set the computer and come back in about a week to shovel out as much as 300 pounds of fragrant, toasty, Grape-Nuts-tasting barley malt.

In reality, it's a bit more fussy than that, but the students' flexible and affordable rig has piqued the interest of commercial maltsters and food companies that use sprouted grain.

If they can perfect the technology and make it reasonably idiot proof, malting in-house on a small scale might become the newest-latest trend in craft brewing and in brewpubs.

In fact the lovely aroma of malting barley might be a nice little addition to the local brewpub.
Posted by Patrick Emerson at 9:49 AM 1 comment:

Email ThisBlogThis!Share to TwitterShare to FacebookShare to Pinterest
Labels: malting

My brother, a brewer for Summit in Minneapolis, sent along this video as he knows I am obsessive about cask ale.  Note the process at a big production brewery like Summit: prime the cask and then add beer from the conditioning tanks.  It is in this step that the run afoul of the CAMRA types as far as I understand - true cask beer is not primed but finishes out in the firkin.

Nevertheless, to me the main distinction is the lack of injected CO2 that changes the flavor profile dramatically.

Alcohol Spending Up but Beer Down?

A 'business advisory firm' (which seems to be another way of saying 'consultancy') has done a study and found that though spending on alcoholic beverages is predicted to rise spending on beer may actually decline:

U.S. consumers are expected to spend more on beverages over the next year, though beer and non-alcoholic sports drinks may lag, according to a new study by global business advisory firm AlixPartners LLP.

The results showed that 87 percent of U.S. consumers plan to spend the same amount or more on alcoholic beverages in the next 12 months, compared with just 70 percent in last year's study.

Spending on alcoholic beverages is projected to rise at bars and restaurants in the next year, with 37 percent of consumers saying they would buy these items in a restaurant. Last year, the figure was 20 percent. Similarly, 37 percent of consumers said they'd make these purchases at bars, up from 21 percent in 2010. Despite these increases, the study did not bode well for beer sales.

"Our analysis found that one in three consumers would look to reduce their spending on beer by lowering consumption, looking for sales and promotions or trying less-expensive brands," said Darren Morrison, vice president in AlixPartners' consumer products practice.

But all is not bad news for beer, craft beer sales, once again, are predicted to rise:

The firm said craft brews could be the lone bright spot in a declining beer market.

Posted by Patrick Emerson at 9:30 AM 2 comments:

Email ThisBlogThis!Share to TwitterShare to FacebookShare to Pinterest
Labels: US Beer Sales

Beer is Good for You 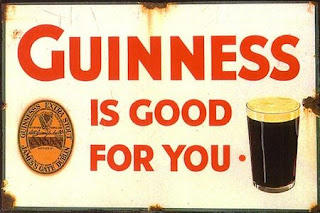 ...according to Cynthia Sass, MPH, RD. Here are her reasons for saying so:

It slashes heart disease risk
All alcoholic beverages, including beer, have been shown to boost HDL, the "good" cholesterol, lower LDL the "bad" cholesterol and thin the blood, to reduce the risk of heart attack and stroke. Moderate alcohol consumption, which is one 12 oz beer a day for women and two for men, has also been linked to a lower risk of type 2 diabetes and improved brain function in older adults.

Beer offers unique benefits compared to wine and spirits
In the Nurses Health study, over 70,000 women ages 25 to 42 were tracked for the link between alcohol and high blood pressure. The study found that those who drank moderate amounts of beer had lower blood pressures than nurses who drank either wine or spirits.

It may help reduce kidney stones and boost bone density
In published research men who chose beer had a lower risk of kidney stones compared to other alcoholic beverages, possibly due to the diuretic effect combined with beer's high water content. Other studies show that compounds in hops may also slow the release of calcium from bone, preventing it from forming a stone. Likely for the same reason, moderate beer drinking has been linked to higher bone densities among women.

Beer contains vitamins, minerals and surprise: fiber!
A standard 12-ounce lager contains just under 1 gram of fiber and a dark beer just over a gram. And in general regular beers contain several B vitamins. A 12-ounce brew also packs more calcium, magnesium, and selenium (a key antioxidant) than a serving of wine.

But Guiness is especially good for you, according to Lisa Bramen on the Smithsonian.com blog:

[The claim that Guinness is good for you] was eventually bolstered by the fact that Guinness contains iron. Pregnant women were even advised to have an occasional pint. Of course, it would take something like a dozen pints a day for a woman to get her recommended daily allowance of iron, in which case the alcohol and calories would cause more harm than good.

But another health benefit was discovered in 2003: stout beer like Guinness (as opposed to lager and other light beer) is high in the antioxidant compounds called flavonoids—similar to those found in red wine, tea and chocolate—that can reduce the risk of heart attack from blood clotting. Researchers at the University of Wisconsin carried out laboratory tests on dogs (Irish setters, I wonder?) with clogged arteries, comparing the effects of Guinness and Heineken. Only those dogs fed Guinness had reduced clotting.

So start drinking stouts and get healthy! I wonder if this includes all beer made with dark malts? If so your hop heads can quench your thirst and heal you body with the now numerous Cascadian Dark Ales.
Posted by Patrick Emerson at 9:17 PM 1 comment: