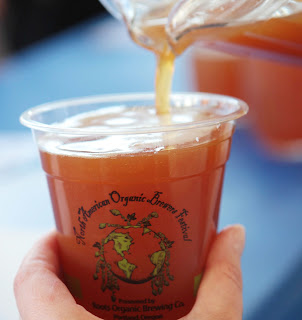 The North American Organic Beer Festival is this weekend at Overlook Park in Portland.  The event, one of the season's best, starts today and continues through Sunday.  Overlook park is a lovely setting for the festival and with the explosion in organic ingredients the beer selection and quality should be excellent.

One caveat, however, to be organic in beer you need only to use organic malt not hops.  Organic hops are still hard to come by but it would be interesting to know if there are any beers at the festival that use both organic hops and malt.
Posted by Patrick Emerson at 10:37 AM 2 comments:

Posted by Patrick Emerson at 5:59 PM No comments:

Will Sellwood-Westmoreland Finally Get a Real Brewpub?


From PDX Eater via Brewpublic I learn that it is none other than Laurelwood Brewing Company that is set to take over the prime restaurant space on SE Milwaukie Ave in the heart of the Westmoreland business district that was most recently occupied by the Moreland House restaurant.  Prior to the Moreland House the space was the Springwater Grill.  Neither restaurant lasted terribly long in the space making me wonder why - it is such a great location.  Recently I mentioned the location to someone else who was looking for brewpub space as it is in my own self-interest being a Sellwood resident.

But I suspect that Sellwood-Moreland will still be without a proper Brewpub.  I mentioned this lacuna in the blog a while back and someone responded that there are already three.  But not quite.  Philadelphia's is a sandwich shop with brewed on site beer.  Oak Bottom Public House is a fully realized pub but no brewing occurs there.  The Portland U-Brew Pub has brewed on-site beer but no kitchen (you can get paninis and such if you are hungry or, even better, scuttle next door to the San Felipe Taquria).  So there really is no fully realized brewpub in the neighborhood. I suspect the Laurelwood will be like the Oaks Bottom - full pub menu and Laurelwood beer, but trucked in from the Sandy Boulevard location, but you never know, they may try to cram in a little brewhouse. This is not a criticism of any of these places, just a statement of desire for a full-fledged brewpub that I ca walk to.

Regardless of how they set it up I am totally excited to welcome the Laurelwood, they have good beer, good food and a good atmosphere.  I am also extremely high on Laurelwood these days now that Vasilios Gletsos is brewing for them. I will give this one word of advice (or perhaps it is a plea) to the Laurelwood folks: do like the Sandy location and have sports on TV, the neighborhood needs a good place to watch games...

NB: I have now patronized the Portland U-Brew & Pub and I have been neglectful in writing about it.  So I'll give a quick snapshot.  The space is a tad awkward, but they have done a nice job working with what they have and creating a comfortable environment.  The dart board rocks and it worth the trip in itself: it is real, high quality and free.  The beers are interesting, when I was there they were well-crafted subtle beers (I think there was a cream ale and a blonde on, for example) and not big hoppy proto-typical NW beers.  All were well done but I did miss the signature IPA.  I think on a warm night, some beer on the tables outside with food from San Felipe next door is a winning combo.

The Portland Fruit Beer Festival is this weekend and it promises to be a highlight of the summer beer fest scene that has become so prevalent in Portland.  The weather is supposed to be nice, the event now commandeers 7th street by Burnside brewing and will have much more pouring capacity than last year - so it is all shaping up to be a big hit.

And we are not talking about watermelon wheat here - these are some serious and seriously creative beers that are a-comin' to the fest.  I had the chance to sample some of the beer that will be featured and here are some impressions and advice for the festival:


Winnners from the beers I have tasted


Hopworks Urban Brewery: What Up Apple-Weizen

A beer I assumed I'd dislike, beer and apple juice? Yuck. But I was totally wrong the wheat and apple play off each other elegantly with a subtle tartness and a really nice apple note that shines through.  My only quibble is that at 6.5% ABV it is a bit big, something in the low 5s would make this a can't-miss summer session beer.

This Ben Dobler beer is a tremendously accomplished beer, a beautiful subtle tartness with a hint of salt that balance the marionberry nicely and the hibiscus adds some complexity all in a 5.4% beer that is very quaffable.  This is the next generation of last years fruit beer fest one-off and now it is a national release (apparently it is a big hit in DC for obvious reasons).

At 10.2% ABV, a very little of this goes a long way, but it is the ultimate desert beer.  Rich in chocolate and strawberry, this imperial stout is rich, complex and sure to please.

This one is hard to describe. It uses the cherry from the coffee bean and had a similarity to hibiscus and there is a dark cherry note detectable.  A tartness from a Belgian yeast balances it nicely.

This beer almost caused WWIII, thanks entirely to Jeff, who is in Burnside's dog house apparently.  But you could not buy that kind of publicity, now the whole world knows Burnside Brewing.  Anyway the beer is a must try even though many will find it too aggressive.  It started with a mango beer that was way too sweet and mango-y, so Jason decided to turn it into a curry and well he did with a bunch of hot peppers as dry-hops to give it a serious kick.  Woah.  It is about the most interesting beer you'll ever taste.


Can't miss beer I have not tasted

I would go to the fest just for this.  Seriously. "Farmhouse style ale brewed with Pilsner malts, Palm Sugar and Nelson Sauvin Hops. Conditioned with yellow papaya and blended with a one year old barrel of Ferme de la Ville Provisions." Remember Nick Arzner is at the helm - this will rock.

Intriguing beers I have not tasted

You work a Lovin' Spoonful song into the name of your beer, I will try it.  Plus, Gigantic is the buzz brewery of the moment.

Sounds like a disaster, but Corvallis is where it is at and I have had more hits for their experimental beers than misses, so I'd give this the benefit of the doubt.

With good weather in the forecast, this is shaping up to be a hell of a fest.  NE 7th and Burnside, Sat 11am to 9pm and Sunday 11am to 6pm.

And finally a note on Burnside Brewing.  I had not yet had the pleasure of visiting prior to the tasting and I was pleasantly surprised.  I thought, given its locale, it would be a bit gritty, but it is not at all.  It is a very pleasant space, has some tasty appetizers and nice beer.  I'll be back.
Posted by Patrick Emerson at 10:57 PM 3 comments: