How Much is John Harris Worth? 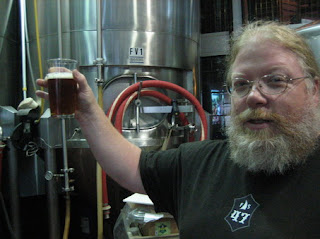 
So the question is, what is John Harris worth? I mean this to be provocative, but think: now that the craft beer market is exceptionally crowded what is the potential difference in sales from having an almost great beer versus an exceptional beer? It is quite likely a few orders of magnitude. So if you were starting a new brewery as a purely business venture (I am aware and grateful that most breweries are started from other motivations) the difference between a good brewmaster and a great one can mean millions in sales. Like the post above, craft brewing in Oregon seems increasingly to be a winner-take-all market, where a few exceptional breweries get the majority of the shelf space, taps, and overall market share. Someone with John Harris' talents should make disproportionately more than most other brewmasters according to the theory. I don't think it has happened yet, but I would not be surprised to start seeing this in the future (especially as the macro brewers start to try and battle in the micro segment).
Posted by Patrick Emerson at 11:06 AM No comments: