Honest Pints in Britain - or - Still Imperial after all These Years 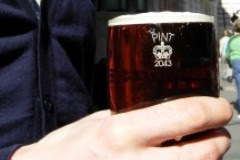 There has been a lot of attention paid to my good friend's Honest Pint Project here in the US as people start to wonder what size glass of beer they are being served. Now from the UK comes this tidbit: after a battle with the bureaucrats in the European Union, the Brits won the fight to keep the imperial pint. Doing so preserved an essential part of their culture: to drink an ungodly number of true imperial pints in one sitting. [I honestly don't know how they do it - I was once in Heathrow Airport in the early morning in the international departures lounge watching a group of English holiday makers down beer and each had about 6 empty pint glasses in front of them, and they hadn't even left yet for their vacation! Truly astonishing, and pity the poor Spanish who have to put up with the louts. Me mum's English so I know of what I speak.]

From the BBC: "Innovation, Universities and Skills Secretary John Denham, who is responsible for national weights and measures, was delighted. He said after the European Parliament vote: 'People in Britain like their pint and their mile. They should be able to use the measures they are most familiar with, and now they can be sure that they will continue to do so. '"

I have two comments. First, why don't we label the glassware used in bars so we know what we are being served? Second a minister of innovation, universities and skills?!? How cool is that title? Of course, that the secretary of I, U and S is involved in the imperial pint fracas kinds puts lie to the title, doesn't it? Still, it doesn't seem like such a bad idea to institutionalize the idea that a country should have a coordinated approach to education and research and development.

Ah well, its Friday, so cheers! Have a good weekend.
Posted by Patrick Emerson at 4:01 PM