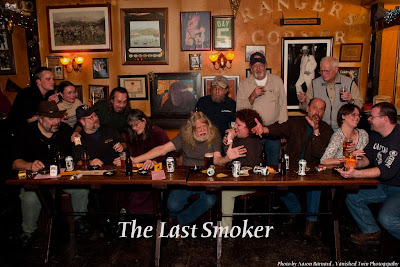 OK, so I had to find some excuse to post this picture which is all over the Oregon beer-o-sphere. It is Don Younger striking a familiar pose on the last day smoking in bars was allowed in Oregon. How will the ban affect Oregon's bars, pubs and breweries?

Matthew Engle in the Financial Times, writes that beer sales in Britain have declined 10% since the smoking ban was imposed there. Why should this be so? It is certainly true that the two, beer and cigarettes, are complements and so increase the cost of one [smoking is more costly because you have to go outside and do it] and the demand for the other falls.

Will this have as big an effect in Oregon as in Britain? I think it unlikely as most of the ever-so-popular pubs and brewpubs are generally non-smoking establishments anyway. But I do imagine that some small bars could find business down. I guess the bigger question is: given that there are many alternatives to patronizing and working in non-smoking establishments, is the ban necessary? The free market side of me suspects not. But the ban is no so much about this, I assume, as about public health and the cost of caring for smokers later in life. If this ban manages to reduce overall cigarette consumption, then it could easily save the state a lot of money down the road.
Posted by Patrick Emerson at 10:38 AM