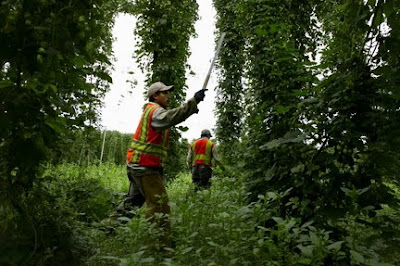 After my rather lengthy disclaimer about how talking about beer is a device through which I discuss economics principles and have some fun in the process, I tenuously dip my toe back into the beeronomics pond...

The always reliable John Foyston has a great article in today's Oregonian on something that I informed my loyal beeronomics devotees of a month and a half ago: the hop shortage is over and in fact we are in a hop glut.

But I am not a reporter. Thankfully, John is and he has uncovered some fascinating aspects of the current situation. One interesting fact is that apparently because the hop shortage convinced breweries that they needed to contract in advance for their hops, there is currently no spot market at all for hops. So excess supplies have no where to go. Amazing.

The big news, which is in Foyston's lede is that this glut of hops should not result in lower beer prices, even though prices rose significantly with hops prices.

This comes as no surprise to an economist. For one reason, the statement above about how all hops were forward contracted means that prices cannot fall due to the glut in supply. Brewers locked in higher prices as an insurance policy to ensure a supply of hops and, well, lost the bet in essence. Foyston himself makes this point.

But the other reason that this economist is not surprised is what I mentioned in that previous post. Across a huge array of industries, price changes tend to be asymmetric. Industries are very quick to raise prices in response to higher costs but very slow to lower them when costs come back down. This does not seem to be true of individual retailers, by the way, so don't blame them, but it is especially true of industries like beer that have complicated wholesale distribution networks.

Here is Sam Peltzman of the University if Chicago writing in the Journal of Political Economy:


Output prices tend to respond faster to input increases than to decreases. This tendency is found in more than two of every three markets examined. It is found as frequently in producer goods markets as in consumer goods markets. In both kinds of markets the asymmetric response to cost shocks is substantial and durable. On average, the immediate response to a positive cost shock is at least twice the response to a negative shock, and that difference is sustained for at least five to eight months. Unlike past studies, which documented similar asymmetries in selected markets (gaso- line, agricultural products, etc.), this one uses large samples of di- verse products: 77 consumer and 165 producer goods.

So it looks like the craft beer industry is no different. So even when forward prices adjust to the increased hop supplies, we shouldn't expect beer prices to follow suit.

One quick note on the ephemeral nature of fresh hop beers, since we are on the subject of hops. I finally got my hands on a bottle of Deschutes Hop Trip which was, by most accounts, one of the real gems of the fresh hop beers this year, so I was excited. Unfortunately it was a total dud. It was brewed a while ago now and the hop essence had completely disappeared from the bottle. The beer was thus an under-hopped disaster. And for $5.50 this is a problem, I expect a superior beer at that price. This, I think, illustrates the difficulty of bringing a fresh hop beer to a mass market in bottles, though in the past few years I have not had the same experience.

Although, strangely enough this is why I like fresh hop beers so much: they are as far away from industrial macro lagers as you can get. They exist only in a moment in time and are connected to the land like wine. So I don't mind suffering the occasional dud. But I do think breweries are going to have to keep track and establish "sell by" dates to limit the number of dud beers sold.
Posted by Patrick Emerson at 7:39 PM