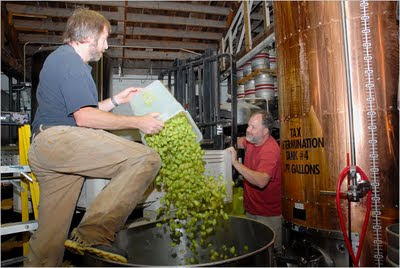 USA Today reports that an ingredient in hops, xanthohumol, may help prevent prostate cancer by acting as a testosterone blocker. From the article:

An ingredient of beer may someday help ward off prostate cancer, new animal experiments suggest.
The compound in question, xanthohumol, is found in hops — the bitter flavoring agent in beer — and is known to block the male hormone testosterone, which plays a role in the development of prostate cancer.

"We hope that one day we can demonstrate that xanthohumol prevents prostate cancer development, first in animal models and then in humans, but we are just at the beginning," said lead researcher Clarissa Gerhauser, group leader of cancer chemoprevention in the division of epigenomics and cancer risk factors at the German Cancer Research Center in Heidelberg.

The findings were to be presented Dec. 9 at a conference of the American Association for Cancer Research in Houston.

Xanthohumol is a flavonoid, a group found in many plants, fruits, vegetables and spices. Studies of xanthohumol have shown that it blocks estrogen by binding to its receptor, which may lead to prevention of breast cancer, the researchers say. It's known that estrogen and testosterone receptors react in similar ways.

As always, I bring such good news at perfect moments in which to conduct your own experiments. Quick, run out and get yee to Belmont Station and load up with a crate full of Hopopotamus® and hunker down for the ice storm of the century! Your prostate will thank you (and will probably get a lot of exercise as well as you make many trips to the bathroom - okay, a little too much: getting giddy from the end of the term euphoria).