Beer in Brazil Redux: Social Media and Beer Culture in the Southern Hemisphere 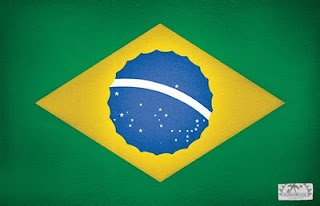 Wow, so I inspired some passionate responses with my cavalier statement about beer in Brazil.  Apparently there is a lot going on here that I did not know about, but it is still a sub-culture.  A number of Brazilians took me to task for being ignorant and yet making broad statements.  Fair enough.  In my defense, flippant statements are my forte, and I wasn't really trying to put down Brazil.  It does give me a healthy does of perspective though.  Coming from Portland, Oregon where it is harder to find a macro-lager than a quality craft beer, where just about every single bar and restaurant has at least one craft beer on tap and where craft breweries are around every corner it is easy to lose a sense of perspective.  What I see in Brazil, where I have only visited Rio, São Paulo and Salvador, but have gone to many bars and restaurants, is macro lagers.  I have not been exposed to Brazilian craft beer because I have not been able to find it.  I have not specifically looked for it, but in Portland, you cannot escape it.  So relative to Portland the craft beer scene in Brazil has not yet made much of a dent.

But social media may change this.  Very soon after my off-hand post on beer in Brazil - which, by the way, was intended to be an amusing post on an interesting bar and beer serving styles, not a negative post - the Brazilian craft beer Twitterverse, of which I was heretofore ignorant, was aflame with stories of my blasphemy.  I was labeled a gringo ignoramus.  Which is fine, actually: I was not offended but surprised and delighted that there is a passionate craft beer crowd in Brazil.  It also clued me in to what is out there and particularly where to find it. So I will find it.  I don't know how widespread is the use of social media, but in São Paulo and Rio at least it seems fairly popular.  It is an interesting case then. Brazil seems like the US around the time when Sierra Nevada, Boston Beer and Anchor were starting to make inroads against the big macro-brewers, but unlike then social media is a real potential force. Word-of-mouth can spread quickly and easily and could, one hopes, make craft beer a trendy thing.  [As an aside, Malcom Gladwell in the latest New Yorker has a nice piece on the role of Twitter in political movements and makes the case that Twitter is best at weak connections but less good at strong ones.  So it is great to get people to try craft beer but less good at starting political revolutions]

So what about Brazilian craft beer?  Well, there is A LOT to say about beer in Brazil! ;-)

But there is definite interest and excitement about craft beer in Brazil, and that, I think, bodes very well for the future.

Finally, Raphael Rodrigues commented and pointed me to his very nice beer blog (in Portuguese but you don't need to know the language to get the point).

It appears that the German influence in Brazil (especially in Rio Grande do Sul) has had the major impact on craft beer a well.  There are a lot of German-style brewers among the craft beer scene, mush less so British-style brewers which are the lions share of US craft brewers.

Hopefully tomorrow I can report on some Brazilian craft beer.  And hopefully, next time I am down in Brazil (probably next year) craft beer will have become more widespread.

One question I have for the Brazilian beer crowd is that it appears that lots of Brazilian bars are tied houses (unlike the US when craft beer took off), is this a major impediment to the growth of craft beer in Brazil??

Ciao ciao.
Posted by Patrick Emerson at 11:49 AM

Email ThisBlogThis!Share to TwitterShare to FacebookShare to Pinterest
Labels: Brazil

Thank you for the mentions and all the atention you're giving to our modest but honest beer scene!

Unfortunately I have to answer with a big yes to your question about our bars being tied to major companies like AB-Inbev, owner of the Brahma Chopp you've tasted. Not only the bars but I can say for sure that mostly restaurants are tied too. The big companies here have a huge power on all instances, including political. Just to give an idea of that political power, we have very strict laws here in Brazil that ties the microbreweries hands. For example, to have a new beer on the market, the brewery have to get a licence for that beer with our Department of Agriculture (equivalent to your USDA). The fact is that this licence can take, believe me, YEARS to happens. Until there, you just cannot sell your new beer.
Besides that, the ammount of money the large companies pays the bars, restaurants and supermarkets are considerable and, nowadays, is already part of their budget.
It's a very bad scenario but that's our reality, that's why the craft beers are so underground here. Sad but true!

We (the beer enthusiasts) are trying to make our part, by supporting the local breweries and sharing as much information as we can, on blogs, social networks and with our macro-beers drinker friends. I hope someday we can have craft beers all over the place here.

Online marketing is not just about traffic. You also need to increase the brand’s reputation so that the customers get to recognize it for the future. My mom has own etsy shop and a blog too and the facebook ads management Los Angeles services have been helping her immensely with the promotions.

Good to see that kind of information I like it and I really appreciate the way you explain. let explore the best series of the blog here. https://www.ppcexpo.com/