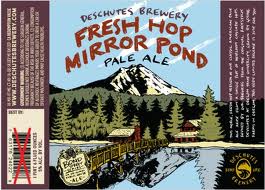 A little late to this, but I have been busy with exploits that shall yield many intersting blog posts whenever I find time to write them - stay tuned.  I have been lax with the news of fresh hop beers, one of my favorite craft beer products, but I have now had enough that I am ready to give a short synopsis.  It is not a completely useless endeavor, I think there are still a number of them on tap and in the bottle so there is still time to get your fix in quickly before the winter ale season begins in earnest.

So let me start by saying I was a savvy consumer of the fresh hop beers this season and I did not make it to a fresh hop beer festival this year so I have not had a single fresh hop beer I didn't like.  But even though my sample has severe selection bias issues, might I be bold enough to suggest that the NW craft beer community is really starting to get it in term of brewing with fresh hops?  Perhaps.

While this might be true, my experience is that the best of the best come from the reliable top-quality brewers in the state.  In my book, Double Mountain lead the pack: this years killer green was amazing, a real hop bomb that was perfectly balanced (in the NW usage of balance) and yet the fresh hop characeter shone through but not in an aggressive way. I think it is the most accomplished fresh hop beer I have ever had (picture below from the Skamania Celebration of Beers event). 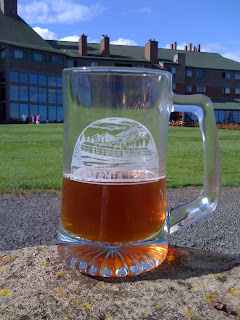 Many beer cognoscenti chose the Deschutes' Fresh Hopped Mirror Pond as their favorite (see, for example, Bill's much more thorough round-up) and though I agree with its excellence, it is not, for me, as transcendent ad Double Mountain's Killer Green (ed. note: I did not have the Killer Red this year).

Other winners: I thought, as always, Full Sails John Harris did an amazing job, this year the one I sampled was the one using Tettenanger hops - fantastic.  Another great one this year was Lucky Lab's The Mutt, which was surprisingly complex and well-rounded given the unknown provenance of the hops therein.  I think the Lab is getting pretty expert at The Mutt now and I really enjoyed the result.

Once again the good folks at the Great Northern Brewery sent me a sample of their Frog Hop beer and once again it was one of my favorites.  They go for a very light body to accentuate the fresh hops which are used gently but to perfection.  One reason for my love of this beer is that they use locally grown hops in the Whitefish Valley - which is what the fresh hop beer is all about: local, seasonal, fresh. 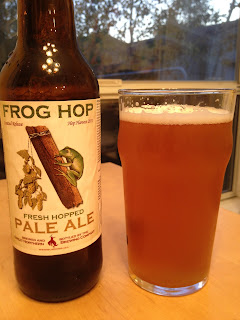 In fact, the Frog Hop was my inspiration for the Green Crown, which is what Jeff named our first attempt at a fresh hop beer.  We had no idea what to do, so I went for a light pale ale recipe, mostly two-row pale malt, with a little crystal and a hint of wheat for mouth feel.  Then it was all Cascade: wet home grown hops in the worth for a dose of first wort hopping, dry cascade for the bitter charge and then a bunch (completely unmeasured - we just dumped a bunch in until it seemed good, and then dumped a bit more...) fresh hops at the end.  From the picture below you can see from whence the name Green Crown came.  I am usually pretty critical of the beer I brew, but this one was a huge success - a wonderful light body upon which the fresh Cascades dance their little dance on your tongue.  Even Jeff, who deesn't think much of fresh hop beers in general, calls it a big winner. 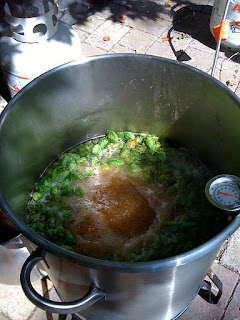 I still have a few in my basement and to my surprise they are aging extremely well: I think the grassy notes have faded just a bit but the rest of the fresh hop sensation remains.  A fitting end to the season.

I can also attest to the fact that the fresh hop beer craze has hopped the pond.  The Dark Star craft brewery in Sussex did their own fresh hop ale this year with English hops: 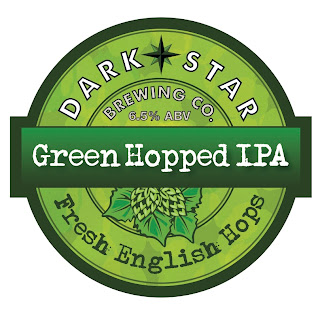 This is super cool, unfortunately it was all gone when Jeff and I visited.  Note that at 6.5% it is an absolute alcohol monster relative to most English beer.

Let the winter beers commence!
Posted by Patrick Emerson at 9:29 AM

Hi, Thanks for such a detailed description! For health reasons, I can drink beer any more, although it was my favorite drink and I am a fan of craft beer. Anyway, I'm happy to read your blog! I know that many people are in the same situation. Therefore, as an alternative, the culture of using CBD products like the ones on BlessedCBD.co.uk is gaining momentum. It seems to me that this is also very cool! After all, the most important thing is the community!