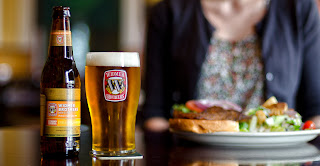 The Widmers do love the Citra hop...and so do I.  Citra, which started out as the experimental 114 hop that gives X-114 IPA its name tastes just like the name suggests: a citrus explosion, more orange and lemon than others on my palate.  As I have made plain in these pages, I absolutely love X-114 (bring it back please!) and the main reason is the wonderful Citra hop note they achieve.

But I also love sessionable beers and am a big proponent of lower alcohol beers with lots of flavor.  And so it is that the Widmers (a brewery which as recently as a few years ago I hardly gave a second thought) have brought out a beautiful new beer, the Citra Blonde for the summer.

At 4.3% ABV and only 20 IBUs you might be tempted to believe that the beer will be watery and tasteless.  You would be very wrong, the beer absolutely sings with the Citra hop while not overwhelming you with bitterness.  It has a very simple malt base, mostly pale malt with some caramel for color and a touch of sweetness.  It pours out a beautiful golden with a slight hint of amber and has a generous head - it definitely looks the part of a summer thirst quencher.  Then it hits the nose with a gorgeous aroma of Citra hops and has the flavor to match.  For those that think you need a 7%ABV hop bomb to get hop flavor in spades this is the perfect rejoinder.  Yes it misses that bracing bitterness but it also wont put you right to sleep in the middle of the day.  I give it a super-big thumbs up, this is the beer I have been waiting from from NW brewers - a hop infused summer session beer.

Once again, time to give it up for the Widmers - they have definitely found their mojo.
Posted by Patrick Emerson at 12:09 PM