What Something is 'Worth' - The Westvleteren Question 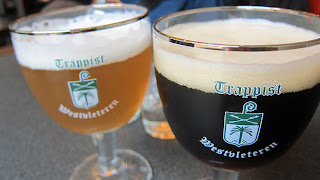 Update: Here is one from the archives that matches the recent pod.  With an update at the end.

Sometimes being an economist makes life very simple (some might say overly simplistic) but I am amused by the frantic talk about the release of the Westvleteren 12 in the US.  I'll riff off of Jeff at Beervana:


The cost is dear ($85 for six), but it goes to the monks at Sint Sixtus as a part of their capital fundraising effort to build a new roof. So you could think of it as a donation in which the monks give you a token for your support. I would strongly urge you to consider that when weighing the question of "worth." (You might also compare it against the price of a plane ticket to Brussels.)

Fortunately, the question of worth is something long ago settled by economists. Worth is a function of supply and demand.  There is nothing intrinsic to gold that makes it worth more except the fact that is is malleable, shiny and rate.  So demand is high because of its good attributes and supply is scarce making it an expensive little item.  Water is absolutely vital to life but not very scarce and so we buy it very cheaply and so on...

So is Westvleteren 12 worth $85 for six?  Well that is for you to decide, for some it will not be and for others it will. This will be a function of how much enjoyment you'll get from drinking it, how much you cherish the opportunity to try it and your ability to pay for it (among other things).  Whether the market thinks it is worth it depends on whether there are enough people who think so relative to the amount for sale.  I suspect the answer will be a resounding 'yes.'

This is also apropos to the discussion in the previous podcast, is there a craft beer bubble.  If it is the market and the market alone that establishes the market value of a good. In this sense if the market price of something seems absurdly high it is odd to call it is bubble.

But here is a thought question: Do you value something simply because of its scarcity?  Would you, for example, be willing to pay extra for a bottle of beer simply to be able to say you have tried it?  I think that for a number of consumers the answer is yes and this inflates the price?  But is this any less of a reason to play for a beer than the actual quality of the beer inside?  To an economist the answer is no.  It doesn't matter.  We are agnostic about where preferences come from.  Which is why I say sometimes being an economist makes things simple - we tend to look at the world without any judgement, we just try and explain the phenomena we see - for better or worse.
Posted by Patrick Emerson at 9:30 AM

If the three tier beer distribution system is like other three tier systems, the monks only get about a fifth of that $85. Another quarter or so goes to the distributor, and roughly half goes to the retailer (every distribution step roughly doubles the price). The monks sell direct from the Abby at €39 per case of 24. That's about $51 per case, or $13 per six-pack. Normal distribution cost structures should put the new distribution at about $50-60, if the monks are selling at their usual price. There's glassware and special packaging in the special pack which are likely post-monk additions, though they may earn some from the glassware, but is that enough to cover the additional $25-35 per six-pack? There are other factors, such as shipping costs, but the vast majority of the profits from these gift boxes is going to the distributor who arranged the sale.

Most of the profits are supposed to be going back to the monastery. I know that the distributor charged the retailers $85 and the retailers sold it at that cost. All through the supply chain, people weren't supposed to mark it up so as to pass the most money back to the monks. That's not to say some didn't or that somewhere down the chain, somebody didn't squeeze an extra buck or two out, but overall, this item doesn't really fall under the normal model of product pricing/markup.

Such a great blog keep sharing looking forward in reading more from you. You can as well visit Where to buy kybella online
dysport-2x500iu-for-sale-online - Cure facial wrinkles in no time
How to buy hydrogel butts injection online
You can as well email to: info.standarddrugs@gmail.com for more details regard botulinum beauty