No, not that one, this one: 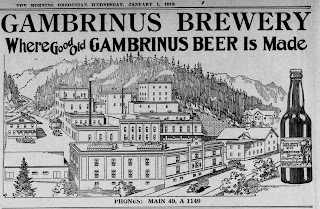 Bill Night has made a map to historic breweries in Portland (of which I was reminded by his comment to VP's post).

Bill, however, did not Bill's map includes the Sellwood Brewery: 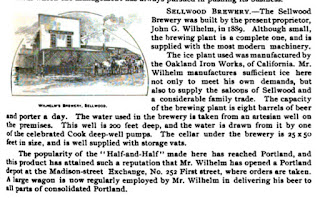 Though it is not clear where exactly this was.  What I love about it is the clear notion that Sellwood is another city down the river - so remote in fact that Mr. Wilhelm's Half-and-Half has reached Portland and is so popular that he has opened a Portland Depot.  I can only assume that this is the same Wilhelm family that ran the funeral home.

[Corrections added - see comments]
Posted by Patrick Emerson at 4:33 AM

Patrick, I do have Sellwood Brewery on the map, as "Wilhelm Brewery/Sellwood Brewery" (if you click to the larger map at Google, there is a list of breweries on the side).

Though, your article from the time says Mr. Wilhelm opened the brewery in 1889, earlier than the Meiers thought (1893). Where'd you get that clipping?

My bad Bill, I failed to open the larger map. And, yes, by the way, Sellwood streets did undergo first a naming change when they were integrated to the Portland grid and later a numbering change when Portland numbers were 'rationalized.'

I've had this clip for a while and for the life of me I can't remember from whence it came! I'll figure it out...