Consumer Reports has had a go at craft beer...with predictable results.  Over at Beervana, Jeff has a go at them, pointing out the myriad problems in their analysis.

This doesn't surprise me, I love CR and have subscribed to their digital version for years and I always consult them for purchases where objective tests and ratings convey real info.  But they always fail when it comes to food.  Tastes are subjective and personal.  A restaurant critic, or beer critic for that matter, can discuss what they liked and did not like about a food or beer, but trying to create a subjective evaluation, which is the CR method, is always going to fail.  I'll just add the little amusing anecdote that they seem to have taken the electronics template and put the beers in it as they refer to different beers as 'models.' Oops.  Check out the ratings of the 'models' below: 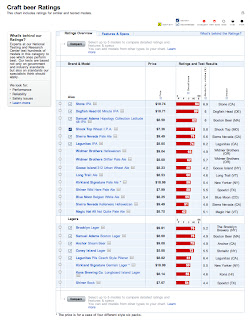 You'll find lots to hate about this list, probably beginning with the presence of Shock Top, Kirkland and other not-quite-what-we-think-of-as-craft beers.

But I'd like to make the rather obvious point that this endeavor is yet another milestone in the popularizing of craft beer.   If CR is doing it, it is because of the widespread and growing appeal of craft beer.  And I can tell you from my experience with my in-laws that these ratings will send a whole bunch of folks past the macro lagers and into the craft beer section of the local Safeway.

The fact that their first taste of 'craft beer' will be Stone IPA may set the whole movement back, however - Stone IPA is not a gateway beer.  It is a full on face melter for the uninitiated - but I digress.

Craft beer is full-on mainstream now and that means lots of good intentioned if misguided efforts like this and we all should welcome these clumsy embraces.  The far greater crime would be to dismiss craft beer as a niche enthusiasts occupation and ignore them.
Posted by Patrick Emerson at 12:01 PM

Good point. Yet another watershed in the broader acceptance of good beer.