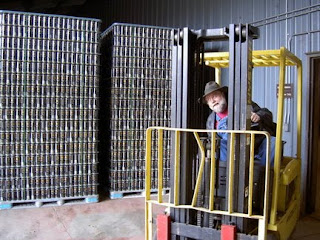 John Foyston has an article in today's Oregonian business section about the growing trend of craft brewers putting their beer in cans.  His article focuses on Fearless Brewing of Estacada, but Caldera in Ashland cans as well, as has MacTarnahan's and Mac's owner, Pyramid, will soon.  From Foyston's article:

"I expect this whole market just to explode," said Johnson, who owns Fearless Brewing in Estacada with his wife, Barrett. "And I'll be the first one in the local market with cans. Cans are perfect for the way we live out here because you can't take bottles to the golf course, you can't take them out on the river and you don't want to pack them into your campsite. Cans are lighter, they chill faster and they don't break."

Johnson is the latest convert to the craft canning revolution. Although the beer can celebrated its 75th anniversary in late January, it has long been associated with insipid, mass-market lagers. But brewers began to realize that it absolutely protects beers from its two greatest enemies, oxygen and light, and that modern linings eliminated any metallic taste. And about a decade ago, craft brewers tumbled to the fact that if you pour good, flavorful beer into a can, that's what you'll pour out.

Cans have many advantages, and they can be recycled (but not reused).  The fact that this is a cheap method of bringing craft beer to retail outlets may be a boon for craft brewers and for enthusiasts who are always looking to try different beers.  I haven't had any Fearless beer, for example, but will certainly try it if it reaches my local stores.

But it is not all good news and for this reason I think brewers should be cautious.  Currently, as far as I can figure out, most or all aluminum beverage cans are lined using BPA.  Nicholas Kristof did a good job explaining the current concern over BPA in food, and here is a report on the now famous Canadian study of soft drinks in aluminum cans:

The first comprehensive testing of bisphenol A (BPA) levels in canned soft drinks in Canada has found that most contain the controversial chemical.

While the levels are low, some environmentalists say the levels may very well be enough to cause harm to children, especially those who drink a lot of pop or energy drinks.

The study, the largest test of its kind, was conducted for Health Canada as it investigates Canadians' exposure to BPA, which has been linked to cancer and reproductive problems.

The study tested bisphenol A levels in 72 samples of canned drinks, including carbonated, non-carbonated, diet, non-diet, fruit-flavoured and energy drinks. The survey represented at least an 84 per cent market share of canned soft drinks sold in Canada.

The chemical was found in almost all of them, and was particularly high in the energy drinks sampled.

The only exceptions were two samples of tonic water. The researchers suggest the quinine in tonic may have interfered with BPA extraction.

BPA was detected at levels between 0.032 and 4.5ìg/l (micrograms per litre). The highest levels of BPA -- 4.2 and 4.5ìg/l -- were detected in two energy drinks - drinks that are popular with teens and university students who often used them to stay alert as they cram for exams.

Now, the final piece in the puzzle - the definitive study that either links BPA consumption with adverse health outcomes (or finds no such adverse outcomes) - has not yet been found, it is likely that cautious consumers will avoid exposure to BPA.  So, until there is a source of BPA free cans for craft brewers, I think it would pay for them to be cautious about moving wholeheartedly into cans.

Update: Over on the Beervana blog, commentator Stan Hieronymus points out a New Belgium blog post on this very issue.  They think the science is pretty clear: no problem with BPA in the lining of cans (they also confim that you can't get non BPA lined cans).  Though they can also say, "get yours in a bottle if you are worried" as they do both.
Posted by Patrick Emerson at 7:46 PM

You face far more danger to your health from a daily dose of aspirin, or for that matter, from three beers a day. Sad that my fellow economist relies on rumours instead of incidence numbers. Plus the reduced weight means a reduced carbon footprint, and last time I checked, the ability of greenhouse gasses to threaten lives through extreme weather events and crop failures was also a thing.

Can't stand when people inject their own prejudices, class, cis, and dyadic, into yet another overblown-risk story.