The Novelty Curve, Economies of Scale and the State of Craft Brewing

Whew, how's that for a title?

Over at Beervana, Jeff Alworth has blogged a couple of times recently about some new data purporting to show the health and growth of the craft brewing industry.  He discusses how the data reveal an interesting fact about the industry: there are a few big players (Boston Brewing, New Belgium, Sierra Nevada, Full Sail, Deschutes) and a TON of very, very small breweries.  He and I have also had conversations about the overall trend.  Craft beer cheerleaders look at the remarkable growth in market share over the last decade and the still small share in general to suggest that the future is bright and that there is no reason we should not expect craft beer to continue to grow both in overall volume and in the number of breweries. I am skeptical.

The model I have in my head of the craft beer industry in the US is one that is mainly characterized by a tension between two forces: novelty and scale.

The first comes from the natural desire of consumers to consume variety. Most of us don't eat the same meal for dinner every night and we tend to get tired of any one meal we eat too often.  But the variety desire at the market level can be also arise because of static and different tastes. Finally, tastes can evolve - consumers get used to hoppy beers, for example.  So dynamic tastes, where consumers of beer find their tastes evolving and are always looking for new and interesting experiences, can also drive the market demand for variety.  All this leads to the advantage new breweries have in brewing new styles reach customers that were previously badly served because no beer was available that matched their preferences well, or to consumers looking for new things, or to consumers looking for more adventurous drinking experiences.   Jeff has coined this the 'novelty curve,' and suggests that new breweries have an advantage over established ones because of new, fresh products. [Ninkasi comes to mind]  Established breweries, like Bridgeport for example, have a more difficult time trying to keep a standard line-up selling while at the same time satisfying the desire for new tastes. 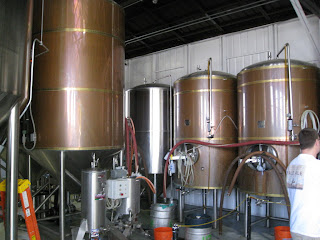 The second is a natural aspect of many industries - the larger the volume of the firm, the lower the average cost of producing the product. In brewing the size of the brew house, the ability to have your own bottling line, efficiency in distribution, number of taps, brand recognition, and many other aspects make brewing an industry that is subject to significant economies of scale.  What this means is that larger breweries can undercut smaller ones, all else equal.  [My colleague, Vic Tremblay, has estimated economy of scale effects for the large industrial breweries up to about 23 million barrels, if memory serves]

Because of these two forces and how they interact with the craft brewing industry, I expect that the industry will always be characterized by a lot of volatility.  I think that there will be some stable mainstays (the Deschutes and Full Sails of the world) that have the scale advantages and try hard to keep up a line of unique, one-off, specialty beers to feed the novelty curve.  And a lot of churn (in economics-speak) among the smaller breweries.  I think the brew-pub model is the way to go here as a stable revenue stream from food and an in-house captive audience for the beer can help tame the vagaries of a fickle consumer base.

All that is to say is that I don't think the number of breweries continuing to increase is a sustainable path and I expect another round of shake outs in the market, unless small brewers can establish a successful restaurant operation.  And in general, I think we can always expect breweries to come and go regularly.  But this is not necessarily a bad thing - the better breweries, those that brew good beer, are well run businesses, market well, etc. will stick around and new start-ups will keep offering new, interesting beer.

This doesn't mean that the overall market share of craft breweries won't continue to increase, but as this increases it may reinforce the economies of scale advantages of bigger craft breweries.  That said, mainstays like Boston Brewing have seen sales stagnate, while lots of little breweries have opened, so we may be in a period where the variety motive in the market is ascendant.  The good news in all of this is that the market should always be interesting from here on out for this observer - I think craft beer is here to stay.

Note: the picture is of Hangar 24 craft brewery in Redlands, CA, where my brother is a brewer.  Check it out if you are in the LA area.
Posted by Patrick Emerson at 9:36 AM