Growing Your Own - the Hop Update 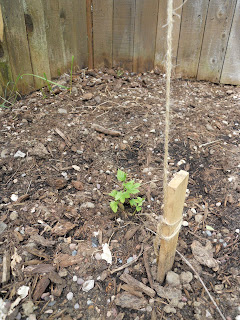 Well, I never claimed to have a green thumb...  My initial rhizome didn't seem to want to emerge from the earth and greet the sun, so I had to declare a failure to thrive and make an emergency dash to Portland Nursery to get a new Cascade hop plant (which apparently is the hop of choice as the pickings were slim among Cascades, but there were ample choices of very mature hops of different varieties).  Now, after taking quite a bit more care with the planting, giving it lots of fresh soil and compost, I am happy to report that my new Cascade hop is thriving albeit still a wee thing (picture above - now about a week old, so it has grown probably 2-3" since then).  My cherry tree also looks to be gearing up for a banner year so beers with home grown ingredients are in the offing.

One side benefit to having to dash off to Portland Nursery is that I pass right by Belmont Station - a misnomer now that it is on Stark, but no matter - and, well, when in the neighborhood one must stop in mustn't one?  Since spring was in the air and hops were on the mind, I picked up a selection of IPAs that are hard to find in my local stores:

Oakshire Watershed IPA - A lovely hop aroma, amber color and medium body. A bit aggressively bitter, but another of the excellent NW IPAs out there for us hop heads.

Hair of the Dog Blue Dot - As a seasonal, it is only around part of the year, so now is the time to track this über-classic down.  Every time I try this after a long absence I am absolutely floored by it.  It is aggressively hopped but has a wonderful creamy body that balances the bitter hops.  It is much lighter than the average NW IPA and I suspect that a dose of wheat gives it its creamy body.   The hops and malt do a dance on your tongue and the floral aroma sings to your nose - rhapsodic.

Rogue Brutal Bitter - My favorite Rogue beer which apparently is being renamed Rogue Brutal IPA.  It is really not a bitter in the british sense as it has more IPA characteristics, but it is not especially bitter so I have always thought that the name did it a disservice.  As I can find about 10 other Rogue beers locally but not this one, I suspect that I am right about the name scaring people off.  Of the four beers here, this surely is the one a non-hop head would be the most likely to love.  The Crystal hops are so clean and bright on the palate it amazes me that they are not used more (at least to my knowledge). I tried to clone this beer with a few twists and it came off pretty well and now Crystals are among my favorite hops to brew with.

Bear Republic Racer 5 - This was the true revelation.  I had not had it before and I have missed out.  It is bottle conditioned (like Bridgport's IPA) which allows the flavors to shine and oh what flavor!  It is aggressively hopped by not aggressively bitter, has a wonderful aroma, floral and citrusy, a lovely amber color and is lightly carbonated thanks to the bottle conditioning. It has vaulted into the top shelf of my favorite IPAs - which includes those listed here as well as Ninkasi, HotD, and Boundary Bay, among a few others.

I highly recommend all four.

Posted by Patrick Emerson at 10:43 AM

Love Rogue Brutal Bitter. It's a very unique, memorable beer brewed with only one hop variety (forget what it is) but just has this great character that's hard to describe.

I dabbled in economics classes in undergrad and grad school, and always thought the craft beer industry was rich with economic topics, so glad to stumble across your blog.

Good luck with you hop growing, and look forward to staying tuned to Beeronomics.

It is Crystal in Brutal Bitter. I very nice, very clean hop with. A little more spicy citrus than floral produces a very nicely bitter beer that doesn't leave an unpleasant aftertaste.