Over at Beervana, Jeff has a really nice post on Ted Sobel, Oregon's Pied Piper of cask (or 'real') ale, trying to lead Oregon's craft beer lovers to a new frontier - but here the analogy ends for this frontier leads not to their doom but to a new and glorious part of Beervana.  Ted is the owner and brewer at Brewers Union Local 180 in far-off Oakridge, Oregon (pretty far even for the real Pied Piper to get followers to come) and he is the states only cask-only brewer.

There are a lot of ways to sell beer in this state, but the easiest is to make them big and hoppy. It helps if you're conveniently located in East Portland--though Eugene seems like a pretty good location, too. A sure-fire business model includes a pub/taproom and capacity to distribute 22-ounce bottles and/or kegs to alehouses around the Northwest. Do that and your road is lined with rose petals.

Ted Sobel ... has not chosen the easy way. He makes small beers with low levels of hops. His pub is three hours from Portland, in Oakridge. He brews real ale, sold exclusively by firkin, and only really trusts one other pub to handle his 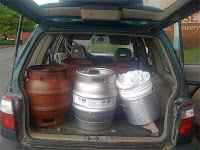 beer. To reach the Portland market, he must load the casks into the back of his station wagon and drive them up himself. For his trouble, he earns less per firkin than he would if he sold the beer in his own pub. In the term of art, Ted has not yet figured out how to "monetize" his vision in the way other pubs have. His road is thorny, cold, and lonely.

For those Portlanders and Oregonians who are into fresh, natural and local, cask ale would seem to be a no-brainer. Cask is all of those things and nothing is more local and ephemeral than a locally brewed and prepared cask. In only a few days it will spoil after it is tapped, no artifical gases are injected into it - all carbonation is naturally occurring (and as I write this I am fearful of making a error that Ted will surely correct for such is the state of cask knowledge that even someone such as I, a huge cask enthusiast, only has rudimentary knowledge of the art).  The absence of injected carbon dioxide tends to reveal flavors that are hidden by the gas and, to my mind you get a fuller, richer experience of the ingredients and flavors that mingle on your tongue.  Which is also why mild beers are perfect for cask, flavors that CO2 washes out will remain on cask.  Mild beers are also perfect for an evening of socializing - quaffable, enjoyable and easy on the brain.

But because of the difficulty of preparing, serving and keeping cask ales, until the appreciation for the product causes a real demand shift it is hard to make them profitable.  Which is why I am here to tell you that if you missed the meet-the-brewer event at the Green Dragon last night, you have another rare chance to meet Ted and taste his beer served the way it is supposed to be served - from a fresh cask - tonight at Belmont Station.  The cask gets tapped at 3.  I shall be making a mad dash to meet Jeff there after my last meeting in Corvallis and hoping that y'all have to wait until later so there is some left for me.  [If you see me, say 'hi.']  It is only through repeated exposure that cask - just as craft beer itself - will catch on and create its own market.

The Hopopotamus™ Update: It has been racked into bottles and will be ready in a week or so, but the occasional zwickel has left me confident that it is, and I am sure all tasters will agree, The Best Beer Ever Brewed™.  In case you were wondering...

Also, my wee hop plant is not so wee anymore, and have been convinced by the beer savant to add about 6 more feet to my trellis support.  It has about 15 feet to grow up now.

Now all we need is some sunny weather and I can get to work perfecting my Northwest Best Bitter.
Posted by Patrick Emerson at 11:35 AM