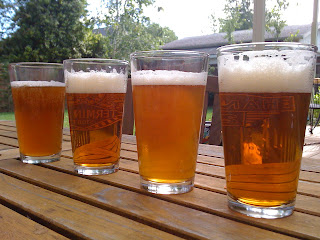 I am in full vacation mode again for a few days while relatives are visiting, so I leave you with this bit of eye candy.  This is from a great NW IPA - off contest that I held with some friends.  They are, in L-R order, Ft. George Vortex, Pelican's IPA, Bear Republic Racer 5 and Ninkasi's Total Domination IPA.  Not pictured: THE HOPOPOTAMUS, which was there in a bottle but never got opened.

The Ft. George was in a growler that was by then two days old, so it was not at its freshest peak so it was at a disadvantage, but it was clearly the most fecund: it smells, tastes and feels alive and all in the best possible sense. Racer 5 is probably the other beer that has that floral essence infused and it is no accident that these two are the two unfiltered beers.  Both Pelican and Ninkasi are cleaner in that sense, a crisper mouthfeel and taste.  What I find remarkable about the Total Domination is the balance between crispness, flavor and nose. It was my pick when pressed - it is a phenomenal beer.  But the really good news is that you don't have to pick and you can let your love of variety (a general assumption in economics about peoples preferences, by the way) carry you away to the far reaches of the beer cooler in the market.

When I demanded that they pick one, the others found it hard to choose a favorite as well, especially since, after a few sips of each, all subtlety is lost - you palate has been nuked.  Since the Vortex was slightly stale, the other winners were Racer 5 and Ninkasi, but the Racer 5 pick was thought to be for Pelican (see below).  We all agreed that you cannot go wrong with any of these.  In fact, they were picked because they represent my very favorite beers over all.  I wanted to add a Hair of the Dog Blue Dot to this flight, but alas it is not in season (oh please, Alan Sprints, make this a year round beer!) and I would have added Double Mountain's IRA, but they do not bottle and I had been in Astoria not Hood River.  So I recommend any of these without reservation and since Ft. George is not available in a bottle, get it when you can.  Double Mountain is easy to find in Portland, but for some reason the IRA is not - always with the Hop Lava.  That's what a cute name buys you, I guess.

Oh and, by the way, we started this as a blind test but we all found it easy to tell which was which.  Almost immediately there was a consensus.  Except for one problem, we all mixed up the Pelican with the Racer 5.  Which, in retrospect, is embarrassing - they don't seem alike at all, especially the way they look.

THE HOPOPOTAMUS would have stood up pretty well against these beers but I decided not to as I wanted to keep it a fair fight.  We did later crack my latest attempt at a NW Best Bitter.  Which is getting there but still a work in progress.  I switched to Whitbread Ale yeast and got some surprising results.

Anyway, got to go entertain the in-laws.  Have a great weekend - pick up one of these beer and let me know what you think.
Posted by Patrick Emerson at 9:42 AM

The sales program is just like the marketing channel but more particularly introduced through a sequence of actions to become a customer. During this stage the professional must develop believe in with their prospective upcoming group participant through discussion or e-mails. Leads will get over 40 exposures to the program during this time along with free gift special offers and live online seminars. You can get more information's from our ipas 2 website.