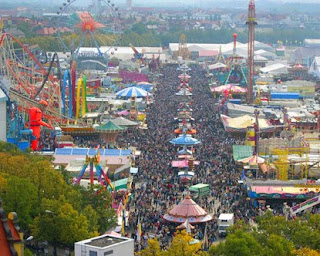 "While Japan and the U.S. think up new ways to combat risks of deflation, Germany is banking on its own 200-year-old solution: Beer. Lots of beer."

So begins Brian Blackstone's Wall Street Journal article on the economic impact of Octoberfest in Germany.

Saturday marks the start of the 17-day celebration of Munich’s Bicentennial Oktoberfest (though it has been canceled 24 times in the last two centuries for disease and wars). It’s a boon for the city: by UniCredit economist Alexander Koch’s count it adds about one billion euros to Munich’s economy, or roughly 2% of its GDP via money spent on beer, food, shopping, hotels and transportation.

Last year, over 6.6 million liters of beer were sold (and presumably consumed) at Munich’s Oktoberfest. That was in the early days of Germany’s recovery from a severe recession, and consumption was up smartly from 2008, though still considerably below 2007’s record of nearly seven million liters.

The research on which this article is based is from UniCredit and is a good read. 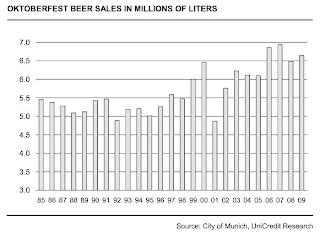 And they are pretty excited about the pro-inflationary effects of beer as well: 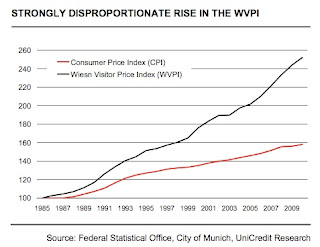 But wait, inflation is bad right?  Well, actually a little inflation (2 to 3 percent) is a sign of a healthy economy and Germany's current one percent rate is a little too low.

Ah the wonders of beer, and it tastes good too!
Posted by Patrick Emerson at 6:44 PM

Email ThisBlogThis!Share to TwitterShare to FacebookShare to Pinterest
Labels: Octoberfest