Growing Your Own - the Final Hop Update 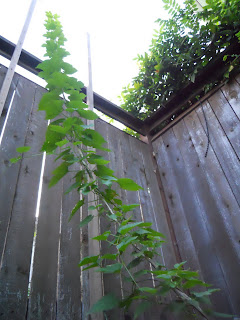 Well fresh hop season is upon us, time for the wonderfully fecund crop of volatile beers - good and bad - made from fresh (as opposed to dried) hops. I have only had Oakshire's so far, so I gotta get moving. But my dream of making my own from my home-grown hops has been shattered by my failings as a horticulturalist. My problem stems from my assumption that any growing vine must be
as hearty as a weed and thus not in need of any special attention. Ur...no.

My real problem was poor soil and so after growing quickly to about a foot, it just stopped. I was patient, but eventually realized it was a failure to thrive and needing of nutrients. Massive doses of compost restarted it and obsessive watering and tending got it moving but too late. It has now stalled out at about 8 feet and no flowers.

The picture above is my best attempt at pretending it is a towering plant. I was told not to expect much of a harvest the first year, but I had hoped for some flowers. Alas. 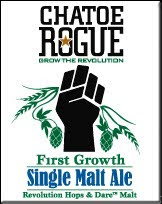 Speaking of growing your own, I finally had a Chatoe Rogue Single Malt Ale made entirely of Rogue's own home-grown barley and hops.  As it only uses one type of malt and one type of hops I didn't expect much - brewers love to blend lots of ingredients generally.  But I was surprised to find that it was a delightful beer: simple, straightforward and very quaffable.  I highly recommend it both as a pean to the local food movement, but also as a great beer in its own right.  And Rogue apparently knows a lot more about growing hops than do I.

As far as fresh hop ales go, I am looking forward to trying Rogues, as well as the standard setting Full Sail Lupulin and Double Mountains Killer Green.

If you want to know where to find fresh hop beers in Portland, use Bill's Fresh Hop Map and contribute when you find an undiscovered one.
Posted by Patrick Emerson at 10:45 PM