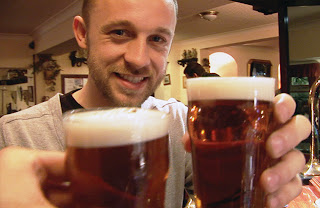 I see that Phil Parkin, pictured above, has been getting the word out to beer bloggers that his film, Beertickers, is available to view for a very small fee ($0.99) on iTunes and asking us to review it. Jeff at Beervana has already given it a big thumbs up.  I am also delighted to oblige.  Phil is a Sheffield based filmmaker and, if 'Beertickers' is to believed, Sheffield is a hub of craft real ale in England. [And yes, most Yanks probably know of Sheffield for one reason: The Full Monty - but don't worry Sheffield has had a strong economic revival] Phil also has a delightful Yorkshire accent which is worth the price of admission in itself. 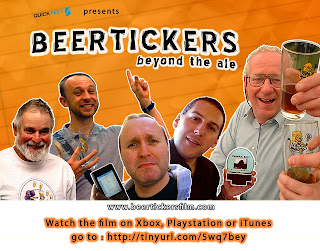 The movie follows the exploits of a group of British "beertickers" - folks who go around finding new beers to try and keeping track of their conquests, ticks them off the list.  [In Britain one 'ticks' a box rather than 'checks' it as we do in the new world] But of course focusing on this curious hobby is just a jumping off point in a greater exploration of British beer culture centered around real ales, craft breweries and neighborhood pubs.

The beertickers in the movie are compared to trainspotters - and in fact many of them were previously trainspotters (those that sought to lay eyes on unique locomotives and coaches) - but the benefits of beer ticking over trainspotting are multitude: you get to sit inside in the warmth of pubs, chat with other punters and most importantly, you get to drink good beer.

It also serves as a good reminder to Northwesterners that though we like to pride ourselves on the number of breweries and the variety of beer found locally, the centuries old beer culture found in Britain is more local, more varied and more omni-present.  In the film we witness 'Brian the Champ' tick off his 40,000 beer - all accomplished on a small island about 10% smaller than the state of Oregon.  You could live a lifetime in Oregon and perhaps manage a tenth of that total.  It also points out the difference in the type of beers typically found in both places: as a part of the tick you write down the name and the ABV of the beer which in England is typically around 3.8 to 4.3%.  In Oregon, pales are often in the 5.5% range and IPAs are now commonly in the high sixes.

Other characters make appearances like the delightful 'Mick the Tick,' who some credit for starting the whole thing, and 'Dave Unpronounceable' and 'Gazza,' who are interesting if not altogether likable - neither really make you want to run out and find them in a pub.

Well-known British beer blogger Pete Brown makes an appearance and utters my favorite line from the whole film when talking about how shit were the home-lives of the industrial revolution British and how shit is the British weather, and thus was created the ubiquitous pub culture as an escape.  He says that when the weather was finally nice, Brits would go outside and play sport and that, as a result, the British "...have invented every decent sport the world has ever known."  And you know, he is probably right.

The film goes on and touches on the epidemic of pub closures (perhaps because British home life is no longer so shit?) and the CAMRA real ale campaign.  And indeed, the beer ticking is all about fresh, local and unique real ale.  It makes me think immediately of Ted Sobel and Brewer's Union, who brews small batches of real ale in the British pub tradition, many of which are unique recipes. Thanks in part to CAMRA, craft brewers of real ales are enjoying a bit of a renaissance in Britain as well and, in the film, Phil travels to the Thornbridge Brewery and helps brew a special batch of their 'Jaipur IPA.'

When watching Beertickers, I couldn't help but think of the Bill Bryson book "Notes from a Small Island" in which he finds the British marvelous in their ability to get real pleasure from small things.  I think this is true and I think that in a way this is a trait I inherited from my British mother.  I find sitting around and having a good chat over a beer in a pub one of life's real profound joys.  I much prefer that to more ambitious shows, amusements and vacations.   This movie highlights this trait and one can't help but be moved by the real joy 'Mick the Tick' takes in finding and sampling a new beer.

Overall, I found "Beertickers" to be a delight - part travelogue, part exploration into the inherent obsessiveness of hobbies, but mostly a beautiful meditation on beer and beer culture. For $0.99 it is well worth a watch.

Here is the trailer:

One last note of warning, it will make you thirsty and in the mood for some real English-style ale.  Harder to find but possible if you are on the lookout.

Cheers!
Posted by Patrick Emerson at 11:28 AM

Email ThisBlogThis!Share to TwitterShare to FacebookShare to Pinterest
Labels: Beertickers

English ales must only be tough to find on the West coast. Here in the east (Baltimore), we have a whole brewery that does that does nothing but English ales! The Oliver Brewery is fantastic.