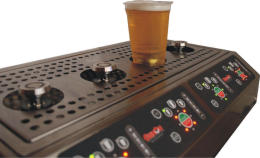 When Barack Obama talks about the US 'winning the future' though leading the world in innovation and development, I am confident he is talking about this:

Josh Springer may have solved the sports fan’s dilemma: Should I get a beer or go to the bathroom if I want to be back in my seat before the action resumes?
His invention, the Bottoms Up Draft Beer Dispensing System, makes it easier to do both by drastically cutting the time it takes to pour and pay for a brew. After a YouTube video that’s been viewed more than 4 million times and an NFL debut that helped the Jacksonville Jaguars set beer-sales records in a year of poor attendance, Springer’s company has signed an exclusive advertising deal with Anheuser-Busch InBev and is preparing to grow exponentially in 2011.

Bottoms Up will make its Houston debut at Discovery Green the first weekend in April, during festivities related to the NCAA Final Four.

Alison Birdwell, general manager for Aramark at Reliant Park, said one or two of the dispensers will be operating at Texans games next fall.

She said the concessionaire also plans to install one or two at Minute Maid Park, although not in time for the Astros’ opening day.

Inspiration struck three years ago at a birthday dinner for his dad, Springer said, when he quieted the table and announced to a skeptical family that he thought he could fill a beer glass from the bottom. Four days later, he’d developed a prototype of a machine that would pump beer through a metal-ringed hole in the bottom of a plastic cup. A magnet covering the hole would then snap back into place. He estimates the process is nine times as fast as a traditional draft system.

Here is one of the YouTube videos mentioned in the Houston Chronicle article excerpted above, and I gotta say, it works pretty well, though I am not sure how much the cups cost or how recyclable they are.  Maybe if you poke around their site you can find out.

Posted by Patrick Emerson at 8:47 AM

This is exactly the invention Ted Sobel was waiting for.