Kölsch Will Rule the World! 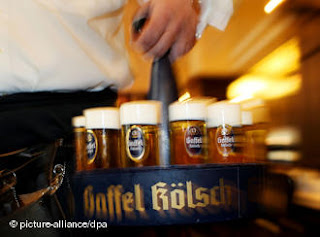 Deutsche Welle has a nice article on the spread in popularity of Kölsch:

It's relatively easy to find German beer in pubs across the world. Major brands like Beck's have global distribution networks, while the traditional Bavarian brews being served at the Oktoberfest are easily found in major cities like London, New York or Beijing.

Recently, however, a much smaller, straw-colored beer from the western German city of Cologne has been making waves abroad. Exports of Cologne's local brew, Kölsch, have rocketed in the past year, with more and more foreign distributors wanting to get their hands on this light ale.

"The United States has been a strong market for us – we've had a 200 percent sales increase in the past three years," the CEO of the Gaffel Kölsch brewery, Heinrich Phillip Becker, told Deutsche Welle.

"Countries like Russia, China and Brazil are picking up the Kölsch culture too," he added.

It is starting to gain in popularity for American craft brewers as well. It is Flat Tail's first bottled product and is my personal favorite from Double Mountain (and that is saying something).

But, as with everything, the Germans would prefer they didn't call it Kölsch. In the EU only beer brewed in an around Cologne can be called Kölsch. But for now they are laid back about it:

Kölsch's wave of popularity in the US has led microbreweries in New York, Boston, Charleston, Philadelphia and Portland to start producing a Kölsch-style drink – something the Cologne brewers are willing to tolerate as long as the newcomers don't grow too much.

"They are producing Kölsch-style beer in small, small quantities – so it's not really a danger for us and our market. We see them more as ambassadors for the category Kölsch," Becker said, adding that any major brewer who tried the same thing would face a lawsuit in no time.

One note to local beer snobs, Kölsch is properly served in a "Stange," a thin glass that holds only 200ml of beer. But who cares, I am overjoyed at the growth in popularity of Kölsch because I love the style and it is also one of my favorite to brew. The Wyeast Kölsch yeast rocks and I have gotten fantastic results. I even gave some to my Cologne born German friend and he was impressed with how authentic it tasted (of course he could have just said it to be polite). But now I know to call it "Kölsch-style" beer....
Posted by Patrick Emerson at 10:20 AM

Email ThisBlogThis!Share to TwitterShare to FacebookShare to Pinterest
Labels: Kölsch

If you like the wyeast, then you should really try the White Labs version, much more traditional flavor profile. As a matter of fact, Dave at Flat Tail uses Wyeast for everything but his Kolsch, of which he uses White Labs. The Flat Tail Kolsch is pretty authentic, best in the state as far as I'm concerned. While I like the Double Mt Kolsch, I think its pretty far outside the parameters of a traditional Kolsch.

Agreed on both counts about Flat Tail and DM. DM is a northwest Kolsch-style beer. FT is pretty full on Kolsch. Both, however, are phenomenal IMHO.

And thanks for the tip about the White Labs yeast. I'll try it next time.

Great link and nice writeup. There was a ton of Kolsch at GABF this year, which made me very happy. I admit I'm surprised, given its decidedly non-extreme nature, but I'm certainly not complaining.

Good post. I learn something totally new and challenging on sites I stumbleupon on a daily basis. It will always be exciting to read through content from other authors and practice something from other websites. Instacart promo codes .