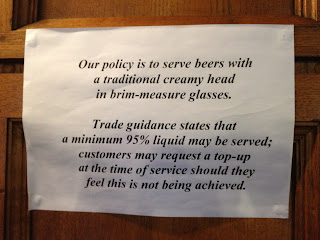 This sign is in the Angel & White Horse, the Samuel Smiths Pub attached to the brewery. 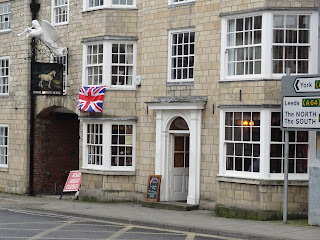 Ahh Britain, the land of the marked glass and the truly honest pint. The 'traditional creamy head' refers to the use of a sparkler - something ubiquitous in the north, but absent in the south of England.

And by the way, there will be much more on this, but Samuel Smith's is so traditional they still deliver their beer in hand made oak casks to local pubs using, yes, white horses that reside just beside this pub (in fact you can see the stables from the side window). And, much to my nose's dismay, they still keep a coal fire burning in the hearth. 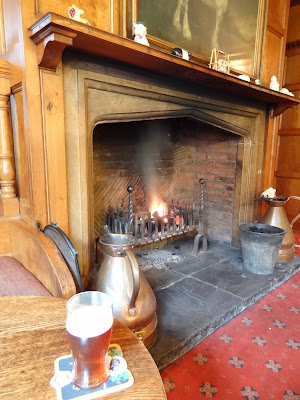 Which only makes sense as they have a massive pile of it to fire the boiler for the brewery. Traditional indeed.

Like I said, much more on this later, but the Old Brewery Bitter, cask conditioned in oak, is exceptional.
Posted by Patrick Emerson at 2:36 PM

That coal fire rocked. I wanted to stay in that pub all afternoon. I shudder to think what the chemicals did to brains back in the industrial revolution, though. (Or is doing to brains in places like China.) Still, for a half hour it rocked.

Er no, it didn't. It was awful, smelly and smoky and make the air feel dirty. It reminded my why Victorian Era English homes were so horrible, you just had to go out to a pub to escape.