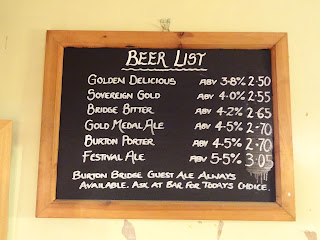 Look at this list of beers from the Burton Bridge Brewery in Burton-upon-Trent and you'll notice that the price varies by ABV. This is something you almost never see in the US unless it is a huge 10+ percent beer. But why not, after all, higher ABV beers are more expensive to make? 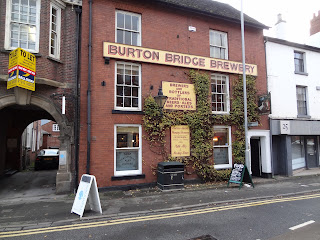 One reason is that customers in the US would be confused, they are not used to thinking about beer this way. But the British are used to it, thanks to a large excise tax that is levied on the final alcohol content of the beer itself.  Below you can see the current excise rate. Note that lower strength beer (up to 2.8%) is taxed at half the rate, which is why you'll often see breweries brew a low strength beer in the UK so that they can sell it for much less money (I had a great one at Greene King).

Here is the current excise rate for beer in the UK (the current tax is the last column):

This is big, by the way, there is a VAT tax as well, but the excise tax for a pint of 5% beer is about 50p if my back-of-the-envelope calculation is correct.  So for the festival ale at Burton Bridge, about 50p out of the £3 price is for the excise tax alone. 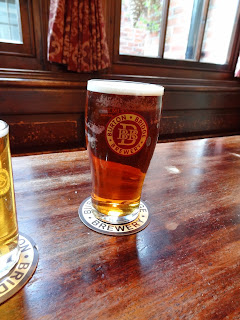 In fact this is such a part of British brewing that apparently the Bass brewery in Burton used to have an entire floor filed with excise agents who tested the beer and levied the tax on each and every barrel that left the brewery. 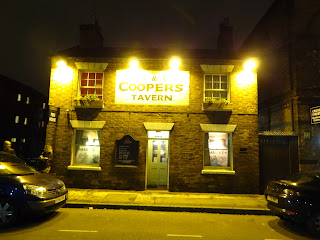 The Burton Bridge Brewery is exceptional, by the way.  You won't find their beers here in the US, so you'll have to go to Burton-upon-Trent to try (which, sadly, is not a big draw - it is a charmless town) but if you are ever in the area, make a point of stopping in, you won't be disappointed.  Then, after, you can do as we did and head over to the excellent Coopers Tavern (in the shadow of the enormous Coors plant).
Posted by Patrick Emerson at 12:47 PM

Burton has more going for it than you make out. Average beer price is now around £1 in taxes

I am happy to be disabused, but I have to say I spent a fair amount of time wandering in Burton and it seemed like 70s and 80s urban renewal all gone awry: huge parking lots and malls in the center of town and by 6pm on Saturday the town center was dead.

I watched the England-Spain game in a huge pub with about 8 people in it.

On the other hand there was a lot of good beer to be had and the area around Burton was quite lovely.

Jeff from Beervana posted a link to this in a comments thread to
this post, unfortunately the blogger wasn't happy with me questioning his pronouncements, and edited/deleted my last post.

I am genuinely interested in a conversation about the economics of session beers and differences in the British and American pricing models, so I thought maybe I'd take that conversation up here instead.

My last post which was edited out centered around the implications Alan had made that the pricing stucture in the States is something the breweries have control over.

If a £5 pint is £1 in taxes, 20%, then the tax makes up more of the cost than the ingredients, even for a small brewery which would have higher costs. Standards COGS (Cost of Goods Sold) in the States for craft breweries is 8-14%. This information isn't easy to succinctly back up, as it is proprietary financial information, but soundbrew.com, JVNW, and probrewer.com all have a lot of related information. The math seems relatively clear that the price of grain in a standard ale is a small percentage of what makes up the cost it takes to get to the consumer. 3-5% is a reasonable range to assume for the purpose of conversation.

In the case of British ales with different gravity-based prices within the same tax bracket: are British publicans simply taking lower mark-ups on session beers? Are breweries taking lower margins? Both?

It seems likely that the historical British tax system had a genuine effect on the pricing of the pints. Did that create a consumer culture which expected and reinforced it? In the States we have no such tax system, so pricing is based on operating costs of the brewery and then usually marked up a blanket percentage by the pub. Some localities suffer inflated pint prices due to taxes, but not on a national level.

No American bar owners that I've talked to lower their margins on lower alcohol beers. I'm not sure if that's always the case. The most interesting question to me is whether publicans taking lower margins on sessions beers would promote craft beer drinkers to purchase them, and whether that in turn would affect overall sales. This gets complicated when calculating table turns/day and looking at pub capacity - for example, if a pub is full, then lower margins drinks are making the pub less money, but if a pub is not at capacity and a consumer stays longer and drinks more pints of a session beer, the profit for the pub could possibly be equal or greater for a lower margin session beer than a higher margin, higher abv beer.

Hello. I have been looking for a good remedy for my potency problems for a very long time. Thanks to generic viagra from india, I finally managed to overcome this disease and return to a normal sexual life.