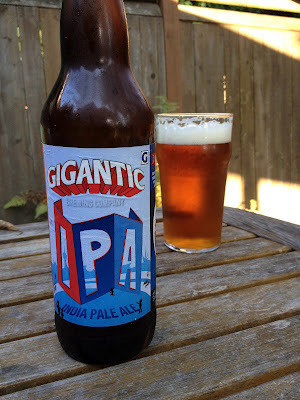 UPDATE: It is amazing what you can find out if you simply read the bottle (in my defense a zealous recycler in my family disposed of the bottle before I wrote the review below).  Anyway the hops used are Cascade, Centennial Crystal and Simcoe.  So I was not that far off, I was pretty sure about Simcoe (which is a wonderful hop variety) and I got the Cascade and Centennial right as well.  I love crystal hops but they are clean and often can be subsumed - the old Rogue Brutal Bitter was a showcase for Crystal and turned me on to it.  Also notable is the fact that it comes in at 7.3% ABV.  Normally, I'd be complaining about this - it is much bigger than I usually like, give me a 6.3% and I am much happier.  And it IS big and full of flavor, so much so that a friend found it too intense.  But it is such a well made beer that I didn't notice the bigness as much as I normally would and the flavor is exactly in my sweet spot (I love the citrus hop if you haven't noticed).  Anyway, it won't be everyone's favorite IPA but it sure is mine.

To say that Gigantic is getting a lot of love would be a bit of an understatement. From John Foyston's blow-by-blow account of the construction of the new brewery to the many rhapsodic reviews that followed its opening (not to mention the crowds of hipsters at the taproom), Gigantic has be beset with high praise. Like such supergroups as Audioslave and Velvet Revolver - Gigantic was born from the star power of well-known brewers Van Havig (of Rock Bottom fame) and Ben Love (Pelican, HUB). Fortunately this supergroup is turning out to be more Cream than Chickenfoot.

I have run across a number of Gigantic's early beers, the most recent being their excellent, and aptly named DYN-O-MITE, that they offered at the OBF.  So my opinion of their beer was already high when I finally encountered a bottle of their IPA at the store and greedily grabbed it.  The IPA is, apparently, going to be their one and only regular offering and to say that in the Pacific Northwest you have to hit the ground running with your IPA is a massive understatement.  Like it or not this will be the beer by which Gigantic is known, their touchstone, their calling card.  Fortunately, they know what they are doing and have managed to hit this one out of the park.

The beer, as you can see in my crude photo, pours a medium amber with orange hues, has an ample and creamy head and very nice lacing that lasts long after the beer is down the gullet. But the relationship with one's IPA should start with the nose in my opinion, and Gigantic's IPA introduces itself with a bang: massively hop saturated aroma that is a lovely pine-citrus.  I do not know what hops are used (though I do know they use a heck of a lot of them) but I detect the more citrus notes of Simcoe, say, and less of the stanky CTZ varieties.  I suspect you'll find the traditional Cascades and Centennials and maybe even Amarillos or Citra in the beer.  But whatever the hops used, Gigantic pulls off that rare feat of achieving total hop saturation full of flavor but without the face-melting bitterness that sometimes accompanies such beers.  This is, as I have written before, what I thinks characterize the NW hop bomb from the palate destroying Southern California varieties (e.g. Stone). Gigantic IPAs aroma carries over onto the tongue, each sip a massive flavor experience that engages a the senses.  Because it lacks the palate destroying bitterness, the flavor of the last sip is just as intense as the first.  This is a truly remarkable beer.

As an amateur I won't try and characterize the beer beyond that, but if you are a hop head like me that loves the aromatic NW hops, this beer is a delight.  You often hear hop bombs slagged off as easy to make - just throw a lot of hops in and you are good - but as a home brewer that has tried to perfect his own hop bomb, I can say with some authority it is not nearly as easy a trick to pull off as it may seem. To get the flavor and aroma out of the hops in a way that sings and dances on the nose and palate is very, very hard. With their IPA, Van and Ben prove themselves to be masters of the hop.

Of course it may also have to do with their pioneering resurrection of the long lost 15th century brewing technique known as rauchspringdammerung which is a combination of triple decoction and party-gyle brewing with metallurgy and the use of virgin softwoods sourced solely from the region of the southwest Czech Republic known as Plzerdns.  Though incredible expensive and time consuming (not to mention bizarre - the insistence on bare feet is especially strange) it seems to yield amazing beers.  But I digress.

I am a true hophead and lover of Pacific Northwest IPAs and I have a running internal debate about which is the best.  For a time it was Ninkasi's Total Dom until (IMHO) QC issues have compromised the product.  I think there is a special place in brewer heaven for Alan Sprints for his Blue Dot which still delights me after all these years.  Pelican, Oakshire, Ft. George and especially Bear Republic's Racer 5 are all in my top 10.  But I now have a new #1: Gigantic IPA is my new favorite beer.

I have tasted the awesome.
Posted by Patrick Emerson at 2:44 PM