The Beer Distributor as Agent Model of Craft Beer 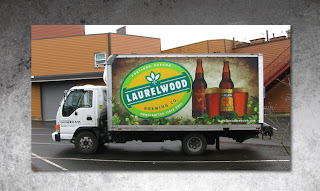 The Oregonian is now in to the second of a set of three articles that extensively explores Oregon's byzantine regulations regarding alcohol sales in the state.  Jeff, over at Beervana, waxes philosophic about the whole thing and today both the Oregonian's article and Jeff's post talk about distributors.

I have always struggled to know exactly how to think of distributors from an economist's perspective.  In other words, I don't know the right model to hold in my mind with which to analyze this set up.  One of the reasons is that normally I would think of models of double marginalization (essentially where both producer and distributor takes a cut and the consumer ends up with less and at a higher price) but when you talk to small brewers these day, as Jeff mentions, you almost always hear them defend distributors.  Why is this?

Well, the key to selling beer is getting it in front of consumers.  Shelf space is hard to come by and subject to capture by the big brewers.  A distributor can use their influence to get smaller brands on the shelves.  They do this because they want as big a stable of clients as possible and they need to get sales for their clients to attract others.  Brewers don't have the manpower to get their beer in stores by themselves and so getting a distributor behind them is a key step to increasing sales.

[Doesn't have to be this way, by the way, at the beginning of the Ithaca Beer Company, founder Dan Mitchell, got his beer sold the old fashioned way, driving all over central New York getting tap handles and shelf space through sheer force of will and charisma.  Oregon is now much more crowded marketplace than was central NY in the late 90s and I doubt an individual would have much success these days around here.]

Anyway, the point is that the model I now think of when I think about distributors is more of an artist/agent relationship.  If you stop thinking about distributors as trucking and storage companies and start thinking them about serving as agents for their clients, the whole thing starts to make a lot more sense and you start to see why brewers defend them so vigorously.  Agents want to make money and they do so by getting their clients money.  To accomplish this they must fist attract clients and then push them on the market - sell them to bars and retail stores, get them prime tap handles and shelf space.  Brewers for their part are happy to cede part of their revenues to pay for this advocacy and service.

The question then is where does this leave consumers, better or worse off?  I think there is a good case to be made that consumers are better off in choice and variety, but worse off in terms of price.  I don't think there is any doubt about the latter - the effects of double marginalization are well known and empirically valid - but how much is consumer choice worth?  Apparently a lot judging by the prices local consumers will pay for a 22oz bottle of beer.  When you pay the same price for one 22oz bottle of beer as you would for a six pack of macro beer it is a pretty strong indication that consumers place a very high premium on choice and variety.

Which is the main thing that the distributor-as-agent model provides - more choice, better variety.  So in this sense, I think that the balance tips in the consumers favor...for now.  In the future, as the craft beer scene matures, there may be more and more natural variety on the market, by which I mean that retailers will internalize the premium for variety they get and look for it themselves.  I think it is beginning to happen already.  But just like a 43 year old economist on Spotify, just because you now have access to variety does not mean you know what to do with it.  So distributors still have a role as agents of beer, selling retailers on brands they may not know of or beers they have never tried.


Posted by Patrick Emerson at 4:17 PM

Thanks. This is helpful and nuanced to a non-economist in a way most discussions are not.

But your final point - "there may be more and more natural variety on the market, by which I mean that retailers will internalize the premium for variety they get and look for it themselves" - remains opaque. What is "internalizing the premium"? It sounds like eating the toy from a crackerjack box!

Sorry, what I meant was that if consumers are willing to pay a premium for obscure craft beer, then this is a rent that retailers should soon recognize and one that should lead them to seek out craft beers rather than distributors twisting their arms.

And I think that's where we are now, and where we weren't at the start of things. Which is why breweries are a lot more sanguine about distributors now than they were in 1990.

have visited this blog first time and I really enjoyed it. beer tackers

Why is this?beer tap handles

Beer is most demanding product now, we are working as a heineken beer distributor and giving you quality. We are dealing in wholesale beer. Also can get buying beer in bulk and alcohol distributors.

Great! It sounds good. Thanks for sharing.. Cider hampers