From the Beervana blog, Jeff Alworth points us to an interesting article in Reason magazine. Forgetting the political angle, the article does a good job of describing a quirk in the market for beer - laws requiring a distributor in order for a bottling brewery to sell beer in retail outlets. I have blogged about distributors before, arguing that there may be an efficiency argument for them. Today, I simply want to describe the economics behind this statement:

"For decades wholesalers have quietly added 18-25 percent to every bottle of beer, glass of wine, and shot of liquor you pour down your gullet."

This makes intuitive sense undoubtedly, but what are the economics of it all? It turns out this is a classic case of "double marginalization." Double marginalization occurs when you have two imperfectly competitive firms in a 'vertical' relationship. Vertical refers to the producer/retailer relationship generally, and in this case it is the producer/distributor relationship. Clearly beer producers are not perfect competitors, they do not sell a homogenized product for one, and neither are distributors that have exclusive rights to sell to retailers particular beers. [Note that if they were perfectly competitive, then there would be no problem as price would always equal the marginal cost of providing the beer for sale]

So what happens? Well the basic story is that both firms want to extract their profits and in so doing end up creating a retail price that is significantly higher, and a quantity that is significantly lower, than it would be if they merged (or if breweries could distribute themselves). Here is (I know you were hoping for one!) the graph: 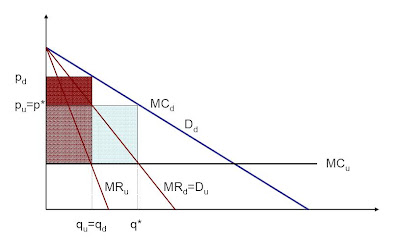 In this picture the demand curve for the downstream firm, or distributor, (denoted d) is given in blue. [In this case we make the simplifying assumption that both firms are simple monopolists - but any market power is enough for the analysis to follow] This is the demand for beer from retail establishments which (since they are highly competitive) closely resembles the demand for beer in the market. Since the distributor is a monopolist they make their price and quantity decision where their marginal revenue (denoted MRd) equals their marginal cost (denoted MCd). Their marginal cost is the price they have to pay the brewer. From this quantity (qu = qd ) they would charge their margin which is the difference between MCd and Pd. Thus the distributor gets a profit equal to the dark red shaded area.

So where does MCd come from? Well, note that depending on what the brewer (the upstream firm = u) charges, the quantity demanded will be read off of the downstream firm's MR curve. Thus the downstream firm's MR curve is the same as the upstream firm's demand curve, creating an upstream firm MR curve. The brewer's MC curve comes from the cost of making the beer and so they set MRu=MCu and lo and behold, the quantity demanded from the brewer is the same as a the quantity sold by the distributor, qu = qd. The brewer's profits are given by the light red shaded area. So consumers would pay pd (assuming competitive retailers) and consume qu = qd beer.

Now let's consider what would happen if the brewery distributed itself (getting rid of the middle person). They would now face the blue demand curve, set quantity at q* and the price would be at p* = pu. The brewer's profits would now be both the light red and the blue shaded areas. So consumers would pay less (p* instead of pd), consume more and brewers would earn more profits.

Interestingly, I once had the owner of an Oregon brewery tell me that he/she likes distributors and thinks that they should remain in place. The owner said that the distributors were their advocates in retail establishments far and wide that they otherwise would not have access to. Perhaps then distributors provide a service not accounted for by this analysis. But if this is efficient, then doing away with laws requiring distributors should leave them in place.

I, for one, would love to see that experiment.

NB: "Marginal" refers to the extra cost or extra revenue from making and selling one more bottle of beer. Marginal revenue is below demand because for a monopolist, making and selling one more bottle means that you have to charge just a little less to get the last person to buy it. But this means that you charge that slightly lower price on all your beer, which dampens total revenue. So the effect on marginal revenue is amplified and thus MR is below D.
Posted by Patrick Emerson at 1:00 PM