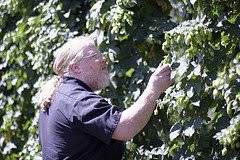 I spent yesterday evening at the Pilsner Room with my personal guide through all things beer, Jeff Alworth, sampling a variety of fresh hop beers, starting with John Hariss' Lupulins. Last year John (seen here) created a masterpiece using Amarillo hops. Those hops are unavailable this year and so he used the same recipe and made three different beers, one hopped with Mt. Ranier, one with the ubiquitous (and delightful) Cascades, and one with Nuggets. Jeff and I both were super high on the Nugget variety as we felt the typical Cascade floral notes were quite subdued in that one. We also had Deschutes fantastic Hop Trip, Double Mountian's excellent offering, Killer Green and, for a change in style, Hopworks' Octoberfest which is also excellent. What a great night. I have to say, I liked the Deschutes fresh hop ale the best, followed closely by John's Nugget variety and Double Mountain's Killer Green. However, that said, the best beer I had yesterday was a pint of John's sublime Prodigal Sun IPA that was being served on cask. Yum.

Speaking of Amarillo hops, John, who stopped by our table for a chat (his brewery is on the other side of the glass wall and there was some sort of Full Sail thingy going on because I spied Irene Firmat and Jamie Emmerson - he apparently doesn't realize one m is enough - and general noshing at a shrimp cocktail spread) told us that the reason there are no Amarillo hops available is that it is a proprietary hop and there is not that much in cultivation. Apparently it started as a wild variant that was discovered on a hop farm and cultivated.

Anyway, this is supposed to be beeronomics and as much as my gastronomic adventures are surely fascinating to all of my devoted readers, let's try and turn my drinking into field research so I can write-off my tab.

So what's the deal with all of these fresh hop beers? Perhaps it is just a way to keep brewers from getting too bored, but I think there is more. In many markets, limited editions, special varieties, alternate versions are thought of as a way to increase demand. The idea is roughly this: for customers that have a strong demand for a product may regularly consume, say, one six-pack of Full Sail beer a week. They may switch from pale to amber and so on, but their demand does not change from week to week. You may be able to increase demand for these consumers from time to time by a special variety that will not last. (It may also be the case that they will just forgo the regular six-pack for the special variety and no new demand will be created). Creating buzz with new products is also useful to get the uninitiated to try a company's beers, to create or solidify a reputation for quality and creativity, and create another opportunity to get people to try 'bigger' beers and thus create more demand.

By the way, in economics the private incentive for firms that have products of multiple varieties is to produce too much relative to the socially optimal amount. Why? Well, the closer you get your product to the idea variety of a consumer, the more you can charge a consumer for that product. But variety is expensive for producers, so overall the costs (and thus prices) overall will rise due to this variety.

John had an interesting insight when I mentioned the recession proof-ness (s0 far) of craft beer. He observed that it may be the bottling breweries that are the recession proof part of the craft brew scene for the supermarket six-pack is not seen as that much of an extravagance, while brewpubs are more vulnerable because a night out in a brewpub where you pay $5 for a pint is probably much more of a splurge for many people. We, I am afraid, will have a long and deep recession in which to test this theory.

So hurry to the Pilsner Room to get your Lupulins before the recession really sets in...
Posted by Patrick Emerson at 10:53 PM