It is April 1 and traditionally this would be the moment for a witty, clever April Fool's joke, but I am neither witty nor clever so I'll just amuse myself with an entirely frivolous post on beer.

Deschutes has jumped on the Cascadian Dark Ale bandwagon with Hop in the Dark (pictured).  The label was designed by the brother of a friend of mine and is, by association, fantastic.  Seriously, it is cool. I am not a huge fan of the CDA or Dark IPA style - I personally find the roasty notes and the floral hop notes in conflict and they don't sing on my tongue as much as argue - but I'll try Deschutes' version as if someone is going to get it just right, more often than not it'll be the Deschutes folks.

Speaking of cool labels, you have to check out Ezra's label for Upright's forthcoming Four Play.  You'll get a chance for a first look at the release party on April 9th (more on that tomorrow).

For me the spring kicks off the season of wonderful, floral, hoppy pale beers that are my favorites.  One great seasonal out right now is Full Sail's Hop Persuit, a real throw-back (in Jeff Alworth's words) by John Harris: a simple pale, hoppy Northwest classic.  In the bottle it is good, but on tap (mine was at the Pilsner Room watching the NCAA tourney) it is transcendent.  Speaking of Harris and transcendency, the Pilsner Room had Slipknot Imperial IPA on cask when I was last there two weeks ago.  Sometimes these extra hoppy beers don't do well on cask because the underlying flavor characteristics that cask brings out are overwhelmed by the hops, but Slipknot on cask reveals itself to be an amazingly complex and, yes, even subtle beer with a vibrant hoppy nose.  Cask can often take away the singeing bitterness that can befuddle the tastebuds and this is true in this case.  Slipknot and Ninkasi's Tricerahops are two of the best cask beers I have ever had.  If you are fortunate enough to find them - get them. 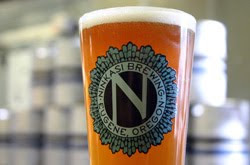 Speaking of Ninkasi, in my never-ending pursuit to try new beers - and with a never-ending supply of new beers in Portland (and I really don't drink that much beer - I just like it to be great beer when I do) - I find myself going long stretches without drinking some of my favorites.  Thus it was recently that I picked up a bottle of perhaps my all-time favorite: Ninkasi's Total Domination. One sip and my immediate thought was "good god, why the hell am I drinking anything else?"  Oh lord it is good stuff.  Also recently I had a Hair of the Dog Blue Dot for the first time in an even longer time (it must be a couple of years)  and had a similar reaction. 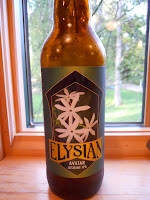 Lastly, while in Seattle last week I picked up a bottle of Elysian's Avatar Jasmine IPA.  It is an IPA with dried jasmine flowers added to the boil.  If you want floral this is it, and while I enjoyed it I was a bit overwhelmed by the very strong jasmine flavor and nose.  A small glass was delightful but enough - a session beer this 'aint.  Still, nice to try something truly unique.

As today is probably the only nice day we will have had or will have in quite a few, perhaps it is a good opportunity to taste some spring beers after work...
Posted by Patrick Emerson at 9:38 AM