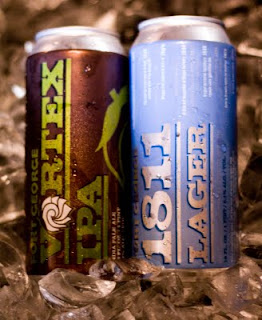 Last weekend, I went up on Mount Hood to go camping and at the last minute decided to bring a little tipple along.  Looking for something tasty and appreciating the compact and collapsible nature of the can, I decided this would be the perfect opportunity to finally try craft beer from the can.  Craft beer in cans is not something I have been a big fan of, noting the BPA liners and the general low-brow nature of the can and so I have, until now, resisted.

When I saw Fort George's Vortex IPA, however, it was a easy decision to make.  Vortex is one of my favorite beers and one that I have only ever been able to enjoy at the brewpub in Astoria.  And I will say this for the can, it did preserve the beer perfectly: the aroma and flavor were excellent, and even drinking straight from the can did not diminish the enjoyment.

I do have one regret, however: Vortex is a massive beer, something I had forgotten.  At 7.4% ABV it is a meal into itself.  Perfect for Astoria's cooler and wetter climate, but less good for a wonderfully warm and sunny weekend on the mountain.  I had a choice between Vortex and Fort George's 1811 lager and I didn't give it a second thought.  I should have, 1811 is a wonderfully over-hopped (for style) lager that is a hop-heads delight and a perfect summer beer.  I should have put off the Vortex 'till later and gone with the 1811.

The other regret is the $12.99 I parted with to buy a four pack of 16 ounce cans.  Were it not for the rush to get off to the mountain and the excitement of the chance to become reacquainted with Vortex, I would have pondered this a bit longer.  This is just too damn expensive.  [Ditto the $5.99 the same Safeway was charging for a 22 ounce Ninkasi Maiden the Shade]  And in this I think I see the rough waters ahead for the craft beer industry: with so much great beer, the companies that can provide it for less are going to be hard to compete with.  When I can get a six pack of Total Domination for $7.99, it is hard to justify the Vortex purchase.

But I digress, the point of this post was both to rejoice at the fact I can now enjoy Vortex at home and to admit to warming to the whole can deal.  Cans, in this instance, were as advertized: handy, easy to deal with and great a preserving the contents.   And big or not, the Vortex was fantastic.

Update: I had to stop in for some supplies and I grabbed a four pack of 1811, which I failed to notice before retails at $7.99 in my local grocery.  Interesting the disparity in prices.  Surely the Vortex costs more to produce, but not 70% more.  So why the price discrimination?  The Vortex must be a hot item while the 1811 less so.
Posted by Patrick Emerson at 9:00 AM

Email ThisBlogThis!Share to TwitterShare to FacebookShare to Pinterest
Labels: Cans

On the price disparity: I don't think this was based on demand, because the two products debuted at those prices. And while I have huge sample bias problems, in my experience, the 1811 is actually the more popular beer--at least this summer.

Price point is becoming a major part of my craft beer purchases. A good example is the 4 pack of Oscar Blue's Gubna Imperial IPA and Ten Fidy Stout go for 10-15 bucks a four pack. While I like to experiment and try new brews once that adventure is done I see no point in paying a premium for a four pack of beers when superior versions of the same style are available from other breweries at a better price. Great observation in your piece.