The last in a series of Summit related posts, I promise.  But as brother Sam gave me a tour of the now 25 year old brewery, it is worth talking about.

Summit now resides in a purpose built building that is located close to the Mississippi river in St. Paul.  Apparently they bought, for $1, the land for the building on a brownfield site that the city was interested in redeveloping.  What they built is an enormous brewery using the guts of the old ---- brewery in Germany including a lovely copper lauter tun and boil kettle: 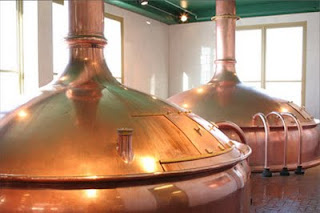 The scale of the place is impressive: their brewhouse is 150 barrels and it runs about 20 hours a day.  They also bought Sierra Nevada's old bottling line which bottles at the rate of ten twelve ounce bottles a second (and yes, that tells you how big Sierra Nevada has become).  It is an impressive place, the scale of which is rarely seen in the craft beer world.

It also gave me the chance to finally try Summit beer.  I had just about the full gamut at their in-house bar, and thus everything was a bit too fast to give a real review but here are some impressions.  The beer I expected to like least, the Red Ale, I liked best: it was nicely hoppy (with Cascades prominently featured) and balanced, it was not malty like I associate with the non-style that is the American red.  I also liked the ridiculously hoppy (and out of balance) silver anniversary ale - I am a hop head after all and a full on blast of hops is always welcome as long as it is not simply bitter and harsh.  , The IPA is a wonderful British IPA - Northwesterners would not embrace it, but old-worlders would find it right in the wheelhouse, full of Norther Brewer and East Kent Goldings it has a lovely soft hop profile.  It is not as transcendent as the Old/New-world masterpiece that is Bridgeport's IPA but very, very nice.  The best selling Extra Pale Ale was not for me, but seems a perfect gateway into the world of craft brew for the macro set.  The porter and the stout were both nice with the stout on nitro and very much the Guinness clone in the sense of being a lower alcohol beer that is dark in color but light on the tongue.

The thing that was most remarkable to this Beeronomist was the fact that 300 barrels of the the one-off Honeymoon Saison were made.  This suggests that the Unchained series has an identity of its own and they are confident it will sell no matter what the style.  And with the PR folks doing a good job selling the human interest side of Sam and Cambers wedding beer story, it will probably not last long on shelves.
Plus, it is a damn good beer.
Posted by Patrick Emerson at 10:54 AM

I wonder if you might enjoy the EPA more if you hadn't tried it alongside all the others. It's actually got quite a bit more character than I expected, and I look forward to a pint when I travel through the Minneapolis airport.