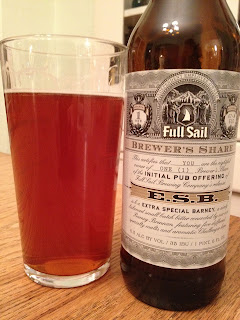 I'm back...finally.  Apologies for my long absence which was caused by my losing, in its entirety, a magnum opus on the modern history of the British beer business.  Lost due to carelessness on my part, I have had a very hard time getting back on my horse after that blunder.  But ride again I shall and eventually get around to re-writing that piece.

In the meantime, you should seek out this little gem of a beer.  This is the latest Brewer's Share beer from John Harris's Full Sail satellite brewery, the 'Extra Special Barney.'  It is a pretty traditional ESB gone New World, by which I mean big.  6.5% big.  Which is my only gripe.  At 5.5% this beer would have been a tremendous traditional ESB, but at 6.5% I find it a bit heavy and malty.  The same hops with the OG turned down ten notches and it is a world beater.

Don't get me wrong, the beer is still wonderful and probably more of a crowd pleaser in the NW than mine would be.  The color is gorgeous and the nose is spot-on perfect.  You get the Challenger hop (super prevalent in British beer nowadays - apparently Fuggles is so old that it has become too susceptible to disease and pests so Challenger is taking its place) aroma immediately and the hop flavor is saturated but restrained.  Excellent.  Oh, and the label is pretty cool too.
Posted by Patrick Emerson at 9:30 AM