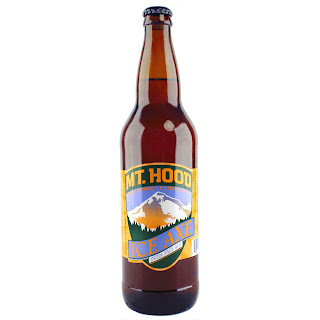 I, among many beer bloggers it appears, was sent a bottle of Mt. Hood Ice Axe IPA to help announce its arrival in bottles and on the shelves of Zupan's Markets. Though I have driven by Mt. Hood's brewpub in Government Camp many times I have never had occasion to stop in, nor have I ever had the opportunity to taste their beer.

Given that I had not been privy to any buzz about the place and also that it is launching (both predictably and smartly) an IPA as its first bottled offering to thirsty Oregonians I was frankly not expecting too much.  What I was expecting was a pretty conventional NW hop bomb with generous helpings of Cascade, Centennial and perhaps Columbus to make a three C hop bomb, or possibly Summit or another heavy citrus hop.  Which is all great for me, I am a slave to such beers.

What I got surprised and delighted me.  This is not a typical NW IPA, it is more of a NW take on a traditional English IPA.  And it is phenomenal.

I don't get too technical when I think about reviewing beer.  Frankly I don't have the palate for it, nor the inclination.  I like to drink beer experientially - by which I mean I like to think less about all of the component parts and more about how the beer makes me feel.  This beer hit a sweet sport because it took me immediately back to my beer tour of Britain with the Beerax while at the same time reminding me of home.

It has a nice malt profile, and pours a fairly deep amber with ample head and nice lacing.  It is exceptionally well-balanced (which will probably lead to condemnation among NW hop heads) and is more malt forward than NW IPAs but true to the English style.  It features English variants Centennial, Willamette and Goldings hops prominently so look for a spicy and slightly piney hop flavor but not the big citrus nose that characterize so many of the big NW faves.   Added to this are Geman style Mt Hood and Magnum hops that further emphasize the spice.  This a brave beer to make in a region that has such a well-defined idea of what makes a good IPA.  This, my firends, is an exceptional IPA but wonderfully different.  As it warmed, the malt biscuity flavors mingled lovingly with the English spicy hops and made me think of those cold English evenings huddled in a country pub, tucked into a sheppard's pie and a fresh IPA.  Nice.

It splits the difference between Britain and the NW by coming in at 5.7% ABV - small for the NW, but grotesquely big for England.  And they claim 60 IBUs but these are English hops and treat your palate more lovingly than do the big NW super hops.

Keep and open mind and enjoy a rare locally made English style IPA, done to perfection.
Posted by Patrick Emerson at 2:25 PM