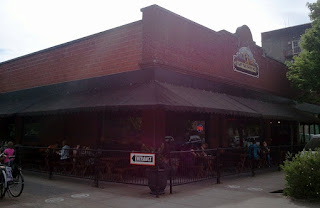 On the last night of an intense work week in Corvallis I decided to finally get back to Flat Tail Brewery.  Work, unfortunately forced me to miss a chance to hang out with Dave the brewer so that will wait for another time but I have two little notes from my economist's notebook to pass along.


I hadn't noticed before but Flat Tail prices beer differently for different beer and roughly by ABV.  Which is nice.  It makes the exceptional Kolsch both a great session beer for being lower ABV but also because it won't make to big a dent in your wallet.  [I also suspect it helps cut down on binging by price sensitive college students but who knows]  The Kolsch last night was as good as I remember and perfect for a lovely summer evening down in the valley.

And talking of beer, I highly recommend the IPA, a great example of getting great flavor and aroma out of hops, but what the heck is Zythos hops?  Apparently good, because it was hopped with Cascade (which I know very well) and Zythos (which I don't).  Zythos appears to be a fruity hop ala Summit that imparts a nice citrus note.

I did not care for the imperial IPA, the Licentious Goat, because I am very sensitive to herbs and spices in beer and generally find them objectionable.  But, that is me and it is a very well made beer and a real crowd pleaser so there you are.  I bought a bottle of a pale ale (whose name escapes me) in a local market which was also very nice - it was great to see bottles out in the market.

I will also put in a plug for the fish and chips (one of my other passions).  The fresh halibut was fantastic and wonderfully flavorful.  Just a tiny bit rubbery, but nice big chunks cooked well puts it well up on my list.  I do think they should rethink the waffle fries though. And something that is often neglected is the tartar sauce, but Flat Tail's appears to be made fresh and is exceptionally tasty.  Ditto the slaw which is sans mayo, fresh, light and tasty.

Funny that the crowd outside Bock 15 was bigger, but Flat Tail deserves just as much love: beautiful location, great beer and good food.
Posted by Patrick Emerson at 11:47 AM