I was invited to a beer tasting event while I am visiting and conducting research in São Paulo.  At first I was excited because I thought it would be a chance to try out new craft breweries in Brazil (which are devilishly difficult to find due to the stranglehold the big brewers have on the Brazilian market), but it turn out it was all macro brews.  No matter it was a fun time and the host was interested in finding out if his guests could distinguish correctly among the beers, find consensus on what beers were good and the ranking of the beers.  Unsurprisingly, there was a distinct lack of ability to tell them apart and no consensus on what were the better beers. 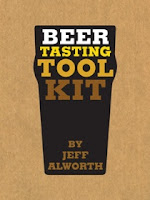 By the way, I don't think it is translated into Portuguese but what my host needs is his own copy of the Beer Tasting Tool Kit.  Next time I come I'll take him one signed by the author...

Brazilian macro lagers have a distinct taste due to their use of corn they are derisively called Brazilian Corn Beers (BCB) by the small but growing community of beer geeks in Brazil.  I dislike them and find them desperately in need of a little more hops.  The beer I turn to when I have a choice is Heineken which is brewed in Brazil but tastes pretty close to the real thing - Heineken in Brazil also produces Kaiser and Bavaria (which was one of the beers at the party).  AB InBev is the global conglomerate that is a Brazilian - Belgian company and was formed in part out of the Brazilian firm AmBev that was formed by the merger of Brahma and Antartica - two of the beers we tried - and they also own Bohemia and Skol.  Thus the companies that are represented in the list below are exactly three: Heineken, AB InBev and Itaipava (Groupo Petropolis).

Frankly they were all pretty bad I am sorry to say, but no worse than if I was in the US judging Coors, Miller and Bud.  They do have a distinct taste due to the corn, just as US macros have a distinct taste due to the rice they often use. I found the beers lacking in taste and substance and my winner won because it was the only beer in which I could detect even the faintest hint of hops.

Still it was a fun time with lots of denigrating the beer and a friendly contest to see who could name the most beers correctly (the winner was able to name 4 beers correctly and did so twice - impressive - the rest of us peaked at 1).  My winner, by the smallest of margins (mainly because I had to choose a winner) was Brahma Extra.  I like to think that this confirms my discriminating taste as I chose the only beer that was 'Extra."

So what of the Brazilian craft beer industry?  Well it did make one appearance in the from of Baden Baden Stout, which at 7.5% ABV was for me far to heavy and sweet.  Take 25% off the grain bill and you might be on to something as the flavors were nice.  I had a Baden Baden Golden the last time I was here and I remember finding it a bit heavy as well so I suppose it is their house style and it makes some sense in response to the thin watery beers.

My next time here perhaps I'll arrange a craft beer tasting party, but for now at least I am well learned in the ways of BCB.
Posted by Patrick Emerson at 11:26 AM

I would be happy to sign it! I'm working on my Portuguese. Feliz degustação!

I'm sorry, if you felt bad about how the beer tasted, Patrick. That's fine, everyone has his/her own bad experiences. :) Guys, when it comes to beer tasting parties, the glasses that will be used should always be clean. Any soapy residue can alter the look and taste of a good beer, you know.