Brewing it Yourself and Growing Your Own

Over a year ago I mused about whether brewing your own beer was a cost saving strategy and concluded that at the scale of a part-time homebrewer the answer was no.  A big part of the cost of ingredients (inputs in econospeak) was the cost of hops (which were particularly high at the time).  But hops are practically a weed man, thought I, what if I grow my own?   So I did, or am about to, to be precise.  For $4.50 I bought a rhizome, a scrounged about for some unused pieces of wood to build a makeshift support for the vine and voila - hops!!  I hope. 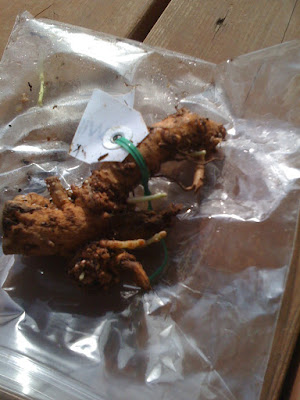 What to grow caused me to ponder - but not for too long.  I really wanted to grow two varieties (and in fact bought two rhizomes) but the wife convinced me that given our wee garden and my inexperience with gigantic hop vines, I had better just start with one.   I chose Cascade - I mean was there really a choice: high yielding, wonderfully versatile with a lovely citrusy-floral bouquet?  No.  Willamette was the other rhizome I bought (anyone want it?), I thought it would be a good complement but alas, next summer.

Finding space was a challenge and of course a good economist thinks about opportunity cost, so... out went the sage!  Opportunity cost of just about zero, right?  Apparently my wife was not so sure, but what's done is done and I am sure she will stop being mad at me once she tastes the beer that will result - and between now and then is only 6 or 7 months... 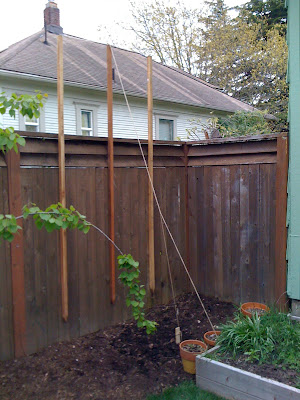 Nevertheless, your intrepid beeronomist jury-rigged a hop support and prayed that he would still have a fence come winter. Besides, I kept them out of the veggie beds which my wife controls (and hasn't gotten around to weeding yet) so I am on pretty firm ground here.  If only she were a beer lover...

So at about $2 an ounce, Cascade hops at Steinbarts are not cheap.  I think I can get at least a pound (though I have been told not to expect too much the first season).   But for a beer with a 8oz hop bill we are talking $16 saved...wow!  Okay, best we not think in terms of pure monetary reward.  The real reward comes in being a yeoman farmer (that is a way inside economics joke, by the way, for you macro-types - here's to you Bruce!) close to the earth and self-sufficient.

Unfortunately (or happily) it is now time to brew again and to gear up for the spring unveiling of my ultra special Hopopotamus® will require no less than three varieties of hop (and maybe even four) - so off to Steinbarts I shall go.  But I shall dream of Emerson's Special Wet Hop Ale come the early fall.
Posted by Patrick Emerson at 11:17 AM