A Night at Upright

Okay, so maybe I am a "beer economist" after all turns out it is working out pretty nicely for me.  I was, for the first time, invited to a media preview event involving beer. Ezra and Alex of Upright Brewing did me the honor of inviting me to the 1-year Anniversary and Four Play release media preview and I had an altogether delightful time attending, tasting the wonderful beer, chatting about the business of beer and meeting many folks that make up the beer-o-sphere for the first time.

Since my readers are mostly not regulars in the beer-o-sphere I suspect, a little background on Upright is in order.  Perhaps the best introduction from the early days is Jeff's.  It is located in the basement of the Leftbank project and focuses on Belgian-inspired farmhouse ales.  Upright's owner and brewer Alex Ganum is a Belgian beer enthusiast, but it was my impression that he was more a fan of the Belgian brewing ethos than the specific style (as much as there is one - see: ethos).  He brews beers in the Belgian tradition but is inspired by local ingredients and uses mostly Willamette Valley grains and hops.  He also uses the tricky open fermentation method and his house yeast is a curious beast - but I am getting ahead of myself.  For a while Upright's beers were only to be found on tap, but now they are turning up in such places as New Seasons in the bottle. The standard line up includes the delightful Four, the more robust Five and the darker Six. 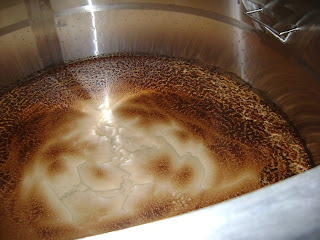 Upright will be a trend-setter, I believe.  The number of breweries that start up, produce a hoppy pale, a very hoppy IPA and so on are myriad - Upright represents a clear break from the trend and a local beer that is truly unique and representative of an entirely different type of beer.  I'll talk about those beers in a future post, but different than most of the beer writers/bloggers in attendance I was interested in the economics of the industry and the niche that Alex occupies.

Brewing such an open style can be a tricky business proposition. Using open fermenters adds some risk to the whole endeavor (though Alex doesn't apparently think it ads much) and building and maintaing a climate controlled and sterile room is expensive.  So in a business sense, Alex is banking on people appreciating his efforts, being able to tell when tasting the beer and being willing to pay a small premium for it.  It is thus unlikely that many other places in the US would support such efforts (though I may be selling other beer communities short).  Alex also uses a yeast that is amazingly hungry but remarkably slow.  It takes weeks for the yeast to go through the primary fermentation stage, and then it just keeps on going during secondary fermentation and in the bottle or keg (so when it goes out the door, he is not entirely sure what it will be like upon opening/taping).  Keeping the beer around for weeks upon weeks is costly and not being able to completely control precisely the finished product is a risk that most business people like to avoid.  I am tempted to make the comparison to wine production, but the dirty little secret there is how much wineries can manipulate the final product with additives.  Not so here.  This just shows you how different this type of truly craft brewing differs from industrial brewing where the bottom line rules and the product is never, ever supposed to taste any different.  Alex admits that it tests his devotion to his yeast, but he hasn't lost faith yet. 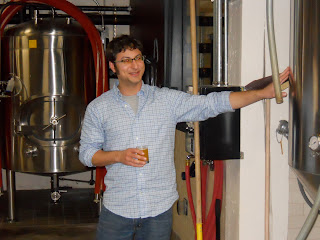 The other interesting thing about Alex's yeast is how efficient it is in the end: it eats just about all of the available sugar.   Most yeast in the beers we regularly enjoy will achieve 70-75% attenuation, but the good Brothers Widmer analyzed the yeast in the lab (and did so pro-bono - cheers Widmers!) and found that Alex's was achieving up to 97% attenuation. Wow.  Jeff has a nice post on the implications of the yeast in the brewing process. 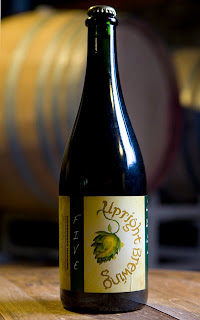 I had a chance to ask Alex the question that I find most interesting: how do you decide on price?  I like this question because for a standard business the textbook answer is clear: you charge the price that maximizes profit.  But in this business - with experience goods and where price is a signal of quality - you want to be careful about what price says about your product.  Alex talked about the 'right' price and I don't know what was in his head but this was my interpretation.  For example, you might think a new brewery would think about pricing very cheaply to get people to try the product so that they could learn about the quality, but doing so might leave the impression that it is not a quality beer (otherwise how could it be so cheap?).

I'll post on the beer later, but for now, it is definitely worth your while seeking out the beer - perhaps the good folks at Taplister (one of whom, Kerry, I met that night) can help you out.  I have seen bottles in New Seasons and I have a suspicion that Belmont Station and the Beermongers might also have a bottle or two in stock.  They are also now at the Portland Farmers Market so you can find yourself some tomorrow while you are there.  You will not be disappointed.  Cheers.
Posted by Patrick Emerson at 5:13 PM