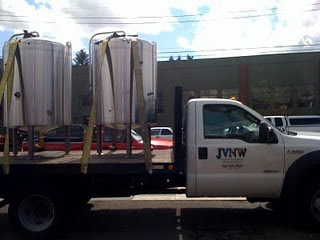 Over at the Beervana Blog, Jeff Alworth notes (and photos) a new set of tanks being delivered to Coalition Brewery near his house.  To the economist in me this picture says one thing: economies of scale.

Economies of scale simply refer to any productive activity whose average costs decrease with output.  In many cases this is due to large fixed costs - those costs that do not depend on the quantity of the output.  Take this brewhouse for example: the cost of these tanks will be the same if they brew no beer or if they brew to capacity.  Alex at Upright, for example, has a beautiful brewhouse but is only brewing at about 60% capacity - if memory serves.  So if Upright brews more, the average cost of the beer they brew will go down - the fixed cost will be spread across more beer.  Since breweries require a lot of large scale equipment, it is an industry prone to economies of scale. There are other sources of economies of scale that are relevant to the beer industry as well: bottling, distributing and marketing to name three.

The implications of economies of scale have been discussed here at length, but the main one is a tendency for such an industry to be prone to concentration.  It is no accident that the big macrobrewers have become bigger and bigger through acquisitions and mergers.  [I have noted in a previous post how the fact that craft brew is an artisanal product and an experience good creates a countervailing force for small scale brewers to exploit]

The good news for Portland and Oregon craft brewers is that, like these internal economies of scale (that depend on the firm's activity alone), external economies of scale exist.  For example, with a lot of local craft brewers there is more demand for ingredients.  This high demand allows farmers and other input providers to achieve their own economies of scale, promotes competition and allows for efficiency in distribution of inputs.  So it is likely that inputs costs are low in Portland and Oregon not just because of proximity to the growers but because of all the brewing that goes on in Oregon.  [There is also a demand side effect, but that is a topic for another day]

So this external economies of scale is a pretty groovy story: the more local craft brewers brew, the lower are the costs for their fellow brewers.  Once again we see that competitors can also help each other out - even unintentionally.  For an industry that is remarkable for its sense of community and fellowship, this shows that they are not just deluded hippies - they are also savvy businesspeople.
Posted by Patrick Emerson at 8:21 AM

Email ThisBlogThis!Share to TwitterShare to FacebookShare to Pinterest
Labels: Econ 101, Economies of Scale