From Denver, I Bring News of Beer Innovation: The Self-Serve Beer Table 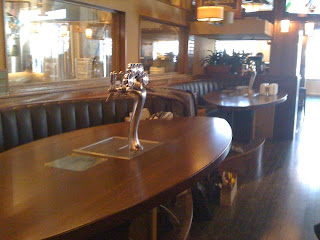 Here is the serve yourself beer tables going in at the Rock Bottom in Denver on the 16th street mall.  I am in town for a humongous economics conference and had a quick lunch at the rock bottom where work was being done on this new innovation in beer (well, new to me at least).  The idea is, according to my server, that you would pre-buy a quantity of beer and the taps would then dispense that amount of beer in whatever combination you wish (there are four tap handles per table).  This is a capital intensive operation and I am not sure that other states' laws would allow for the self-service of beer but it has a nice novel feel to it - plus it saves labor costs.  There are little video screens embedded in the table as well, perhaps to let you know how much beer has been poured.

Too bad the beer is mediocre.  I had only time to taste their IPA and it was disappointing.  However, last night I had an Odell IPA that was lovely: a real NW style hop bomb with a lovely nose and nicely balanced.
Posted by Patrick Emerson at 4:22 PM

This is the first I've seen one of these for a craft brew. In Baltimore, there's a bar or two that serves swill (Miller Lite, I believe), but my guess is that the distributor was footing at least part of the bill on that one. For those guys, getting the taphandle is easy; it's convincing the customer that choose Miller over Bud that's key. Thus, the convenience factor of not having to reorder or walk to the bar may drive sales. Can't see it as more than a gimmick for someplace like Rock Bottom.

And now that they've canned Van Havig, Rock Bottom is dead to me.