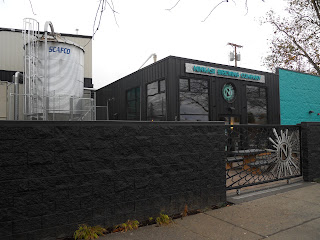 I have been swamped lately and have not had time to get back to writing about my trip (with the Beerax) down the valley to visit four very different breweries.  Jeff has done a good job describing them and their different objectives, but I want to focus on their very different businesses.  I will do it in four parts (because I am still pretty busy).  I will start big and go ever smaller: Ninkasi, Oakshire, Block 15 and Brewer's Union Local 180.

So today I'll talk about arguably the easiest one - Ninkasi. Ninkasi is a packaging brewery that is the big success story of Oregon brewing over the last few years.  Personally, I heard about this new brewery and their great beers about four short years ago.  Now, there is hardly a store in Oregon that doesn't feature their beer, they have tap handles everywhere and they are rapidly expanding into Washington and California.  In fact Ninkasi is, along with Deschutes, probably the most likely craft beer to encounter in any situation in Oregon.  There is a very good reason for this success: the beer is fantastic and nails the Northwest palate sweet-spot - extremely aggressive hop bombs that maintain balance and produce wonderful flavor and aroma.  Jamie Floyd brewer and founder (with Nikos Ridge) told us when we were there that Ninkasi was a 30,000 barrel a-year brewery that buys an amount of hops suitable for the average 200,000 barrel a-year brewery.


Ninkasi decided to go for aggressive big beers and to big fast.  The economics of brewing are clear: there are significant economies of scale that don't go away until well into macro territory, so growing fast makes all kinds of sense.  But going big was a significant risk.  There is a significant and growing craft beer enthusiast consumer base in the NW but would there be enough out there to sustain the amazing growth that Ninkasi has enjoyed?  I wouldn't have thought so, but I would have been wrong.  The appetite for Ninkasi's big beers has amazed me.

Ninkasi is the master of the hop-bomb and hop bombs sell.

Jamie Floyd had a decade of experience in the craft beer industry before he started Ninkasi and he and Nikos came into it with a clear sense of what they wanted and how the business would grow, and grow and grow. I have no special knowledge of Ninkasi's finances, but I suspect that most of the profits have been thus far devoted to expansion.  To achieve this growth, Ninkasi has been disciplined to a price point that is competitive and this is a bit of a bet on that, in so doing, they would be able to sell in quantities that would turn a profit and drive expansion that would bring down per-unit costs.  So far so good.


Though Ninkasi is all about scale and growth, the beer industry is still very much a personality driven business, no matter how big and how fast.  And much of Ninkasi's success can clearly be traced to Jamie Floyd who is an engaging and tireless front-man for the company. Building relationships and creating brand identity is not an easy job, it requires lots of face time and glad handing and Jamie clearly has devoted himself to building the company.  You have to if you want the growth Ninkasi has enjoyed.  No distributor can be the face of the company for you and no beer sells itself.

I suppose the danger in all of this is that some other newest-latest brewery will steal their thunder and the rapid expansion will slow abruptly, leaving them with too much capacity and problems will ensue.  But, if I were a betting man, I'd bet on Ninkasi 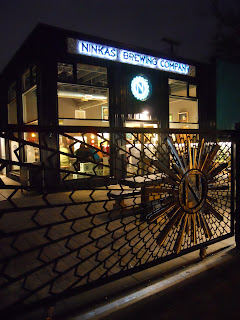 Posted by Patrick Emerson at 9:00 AM

Email ThisBlogThis!Share to TwitterShare to FacebookShare to Pinterest
Labels: Ninkasi

I think you mean Krones bottling line. Kronos would be Gyros and GOD OF TIME!!!

And a good quartet as well! Ooops, thanks for the head's up - fixing now...