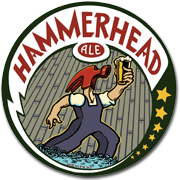 John Foyston has a wonderful article in today's Oregonian about the 25th anniversary of McMenamins Hammerhead Ale.  It is not so much the beer itself I celebrate today, but the McMenamins themselves:  Their pioneering spirit and funky asthetic that infuses their pub empire are, in my mind, primarily responsible for the Oregon brew-pub culture that we now take for granted.

Most cities wouldn't celebrate a beer's birthday, but only one city is Beervana, with more breweries than any other and a beer culture that's the envy of the world. And today, it celebrates the 25th anniversary of Hammerhead, the most popular and one of the longest-lived McMenamins beers.

Which makes it one of the longest continually brewed beers in Portland. Widmer Alt comes close, but is too rarely seen these days, and BridgePort doesn't brew any beers from its early days. McMenamins Terminator edges it out in longevity, but only just -- it was batch No. 12 and Hammerhead was batch No. 37 from Captain Neon's Fermentation Chamber, the brewery that made McMenamins Hillsdale Public House the first of many Oregon brewpubs.

Mike and Brian McMenamin were part of the group of brewers and publicans who got Oregon law changed to allow brewpubs in 1985. The McMenamins went on to build a brewpub empire infused with the quirkiness and creativity of the Pacific Northwest, and they're another big reason that Portland is one of the world's great beer cities. And sometime during those last 25 years, at one or another McMenamins pub, most of us beer drinkers have had a Hammerhead.

But in 1986, neither Beervana nor the beer originally called Old Hammerhead strong ale were quite as we know them today. Hammerhead back then was brewed with malt extract syrups, which is how many beginning homebrewers make beer. It allows brewers to make beer without the hassle of milling malted barley, then steeping and boiling it to create the wort that's fermented with yeast to make beer. But all-grain brewing, as it's known, is the REAL way to make beer, and it was just a matter of time before some ambitious young brewer made an honest beer out of Hammerhead.

That brewer was John Harris. He brews for Full Sail these days, and was at Deschutes Brewery, where he formulated Mirror Pond, before that. In 1987 he was a recently hired brewer at McMenamins Hillsdale pub. "When we went from extract to all grain," Harris said, "in the process of converting the recipe, I threw out the idea of, 'Let's hop the Hammerhead up a little bit more. It's just like a little more hoppy than Crystal, and a little darker, you know, so let's just hop it up.'"

And once again the godfather of Oregon craft brewing, John Harris, pops up - his fingerprints all over the early seeds of the craft beer revolution. It is not hard to imagine an alternate history without John where craft brewing fizzles and remains a niche product.

Anyway this is also a good opportunity to call out the McBrothers because the empire I love so dearly is in trouble in my opinion.

As a student at Lewis & Clark in the late 1980s, the Hillsdale Pub was where it was at - close to campus and serving all kinds of crazy beers like Hammerhead and Terminator.  After I graduated in 1990 I moved to NW 23rd and Glisan (is it a coincidence that it subsequently became so trendy? - I think not) and the Blue Moon and the Rams Head became my favorite hang outs while the Mission was where a poor espresso maker could stretch his meager tips into a fine night of eating, drinking and movie watching.

But nowadays I hesitate to go to a McMenamins and generally only go for some other reason - a movie or some golf at the Edgefield - and I get anxious when I order beer because you just never know what you are going to get.  McMenamins beer, when done right are respectable and enjoyable beers.  I, predictably, like the IPA - which can be a wonderfully aromatic and tasty beer.  But more often than not it is funky or poorly made or both.  Their kitchen suffers similar inconsistency.

In many ways this is completely predictable - their empire is huge and many businesses have struggle under the weight of complexity - but their non-business approach to business has not helped them.  They have an internal distribution network that is a disaster that to an economist is easy to fix: create a market.  But to do so you have to embrace incentives and this is not easy for them to do in my opinion.  They started by having pooled tips for servers and part of the charm for me in visiting when young was to see how long it would take for service.  Now with kids, that charm has become a weakness.

But beer is their core business and serving funky and poorly made beer is inexcusable.  I have heard that turnover is frequent among the brewers and that part of that is due to low pay.  I don't know if this is true, but they need to become more professional in their beer.  Hammerhead is a great beer but only when it is made and served right.

A few weeks ago I had a typical McMenamins experience at a pub I had never visited: the St. Johns.  It is a great place, a wonderfully quirky old building restored and funkified.  I was there to watch the Wisconsin Badgers lay an egg at the Rose Bowl and had a delightful time.  But they had a guest tap - the Fort George Coffee Porter - which I immediately ordered knowing it would be great and that it was the one beer I could count on.   Later I got the courage up to order the IPA and delightedly it was a fine example of what the McBrewers can do when they are paying attention.

I hope the brothers can right the ship before it is too late, they are too much of a local treasure to lose.
Posted by Patrick Emerson at 10:10 AM

Email ThisBlogThis!Share to TwitterShare to FacebookShare to Pinterest
Labels: McMenamins

I find myself with a lot to say on this subject, but for reasons of which Patrick knows all to well, I cannot.

I will say though that setting aside for the moment the poor service, spotty beer quality, and neglectful staff treatment (and pay), I rarely go to an EMPTY McMenamins.

Until someone starts a competing franchise (and it would take exactly that -'one off' brewpubs won't be enough), their non-business business model is in no real danger. Could it be done better - yes, almost certainly, but that is not going to happen under the current mindset.

McMenamins is organic, it's fun, and it's run 'casually'. Most serious brewheads go elsewhere for micros... but for the casual brewhead, a McMenamins is a nice reliable spot. And it is reliable - I can always get food, always get beer which is not 100%, but is usually worth what I pay. And I can be assured that in over 50 locations, I can expect roughly the same thing (slow but steady).

More importantly, I can take those with no real brewpub interest, and they can drink Ruby or Pabst (the latter is in itself worthy of a long column or five on a lesson in economics). And they can feel they got the authentic 'brewy' experience.

I wish I could say more on the other issues... but I owe my undergrad advisor a certain courtesy in this. I will say only however that assuming Beer is the McMenamin's core business is missing the mark a bit. Their real core business, they do well.


(ps - I will say their brewery style does do one thing well - it trains young brewers in every step of the process - part of the McM philosophy. While it leads to inconsistencies, it also breeds brewers who then strike out on their own)

It is interesting that Hammerhead has become the key beer in the McBrothers brand. I was always far more interested in Terminator Stout, for which my heart still has a soft spot.