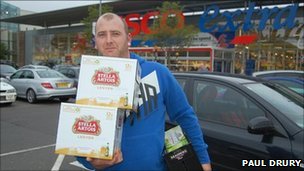 What does it take to move a herd of Scots to stampede? Ridiculously low beer prices, apparently.

An error which slashed the price of beer and cider led to a stampede of customers at a number of Tesco supermarkets in Scotland.

A deal offering three boxes of various alcoholic drinks for £20 was going through the tills at three for £11.

Police were called to Tesco in Greenock after heavy congestion was reported in the car park as customers rushed to get the deal.

A spokesman for Tesco said the pricing error was quickly spotted.

He said till operators changed the prices manually until the system was corrected.

It is understood the offer was supposed to be "buy three boxes of beer and save £11".